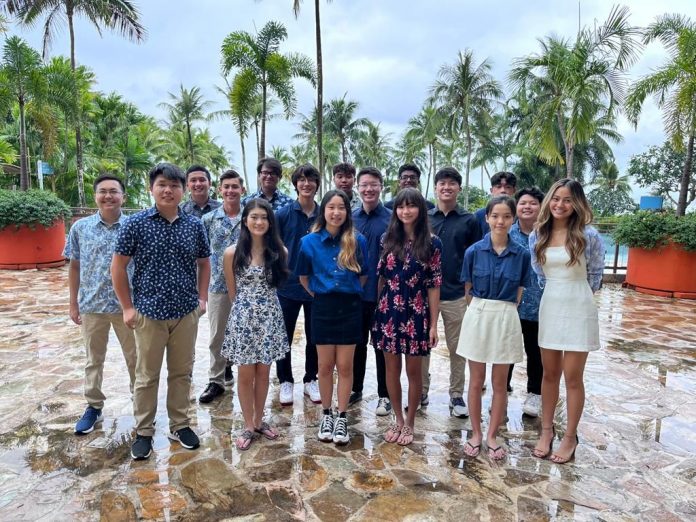 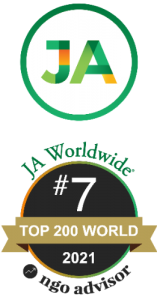 150 high school students joined this year’s competition with seven student companies who stepped up to the challenge, which included in-school programs Tiyan High School team, Southern High School team, an Okkodu High School team, as well as teams mentored by partner companies: United Airlines, Title Guaranty of Guam, The Post, GTA, Bank of Guam, Bank of Hawaii, Community First Guam and Bank of Guam.
The COY competition kicked off in September 2021 and concluded with the Award Ceremony today, Saturday, February 12, 2022, and was viewed LIVE on the Junior Achievement Guam Facebook page from the GTA Experience Center, Tamuning.
Fouha Crafts, sponsored by TITLE GUARANTY, won the 2021 – 2022 JA Guam Company of the Year edging out The Movement Guam, sponsored by UNITED Guam, while GTA’s The Amare Project finished in third place. The President of the Year was awarded to Mark Wang of Fouha Crafts as Grace Dela Cruz of The Amare Project settled for the 2nd runner up with Sophia Espaldon, The Post’s Gatbun Tinifok who came in third.
In other categories, Gatbun Tinifok took home Product of the Year and United’s The Movement Guam won Best Annual Report; Fouha Crafts notched top honors as the Best Business Video Presentation & Best Financial Management while Lending Hands was named Best TV Pop Up TV Commercial and Bank of Hawaii’s SPARK was named Best Trade Fair Display. Vice President of Finance of the Year was awarded to Sebastian Lee, Fouha Crafts, VP Marketing of the Year was awarded to Ha’ani Sanchez from Serein, Tiyan High School; and VP Production went to Justin Joseph.
The 2021-2022 JA Guam Company of The Year and 2nd runner up will represent Guam at the JA Asia Pacific’s annual competition which highlights the achievements of young entrepreneurs in 11 JA country members. The Program and Competition helps young people understand the role of business in the global economy by allowing students to organize and operate an actual business enterprise, and market and sell a product in the
real world. We greatly appreciate all the support from our community partners. Thank you to GEDA, GRMC, the GCC DECA Marketing program, Bank of Hawaii, GEDA and Bank of Guam, SBDC, United and GTA.
“We are thrilled to have been able to host our Annual Company of the Year Program in a hybrid format and during these challenging times. We are in gratitude of our very own Executive Director, Pinki Lujan, our company partners, our board members, the mentors, the judges and most especially the students who have worked tirelessly to make this program a success.” States JA Guam Board Chair: Joey Miranda III.
END OF RELEASE