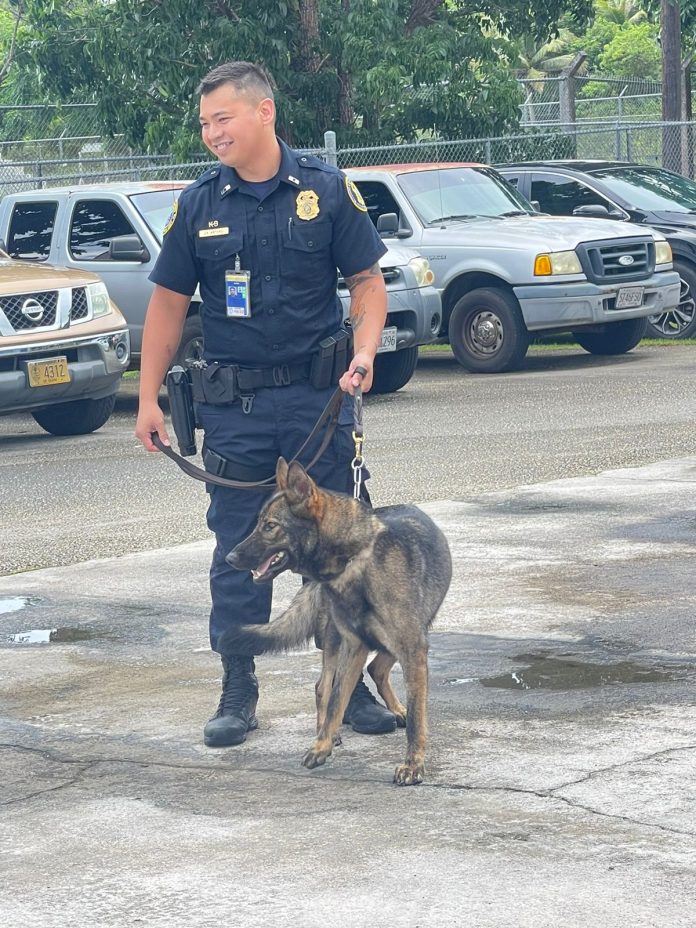 Joseph Cruz, Customs Officer III and Acting Supervisor said, “Today we are conducting a presentation viewing for four detector dogs that we acquired through the funding of the AG’s office with approval from the Governor.”

The canines– named Dome, India, Viki, and Szep are from New Smyrna Beach, Florida from a breeder.

According to Acting Supervisor Joseph M. Cruz, Dogs can work as sniffing dogs for at least 5 years or even more if the dogs are healthy.

Cruz said, “If their body is working health-wise, no ailments, we can work them a little bit longer. But also, we got to have some compassion. Some dogs do deserve to retire.” He added, “More dogs would equate to having more teams out in the sports of entry that would also just have a positive impact on more seizures.”

Customs Officer James R. Lujan, who has experience in dog training, says that the dogs will make a difference on the island. He said, “Just being able to detect a lot of the narcotics that come into the island and stop everything before it hits the streets.”

Customs Officer I Gino Crisostomo, who also has dog training experience, explained one of the challenges in dog training. He said, “The challenges of a canine handler would probably be pretty much the obedience training, working together as a team. Just making sure the dog and you drive together.”

According to Lujan, more work can be done now that there’s more dogs. He said, “Each dog’s working time is always limited so more dogs means more capability and resources now.”

Moreover, Gov. Lou Leon Guerrero says that seizing drugs will be easier now with the addition of the new canines.

Governor said, “I think this is going to help the island significantly in the long run in the era of drug interdiction”

The Governor adds that by having the dogs ready, they are able to crack down on the import and exports of drugs. And weighed her opinion on the island’s drug addiction problem as well. She said, “The more that we can say to these drug dealers and these people that are exporting or importing these drugs that ‘Hey, you know we’re putting up our defenses’ so these drugs can’t come in.” She added, “As you know, drug addiction is very very prominent on our island as I said. It ruins people’s lives. It makes our families dysfunctional. It ruins the lives of our young people. And we need to take hold of that. ”

According to the Governor, rehabilitation methods will be available for captured drug dealers in order for them to become better members of society. Governor said, “We are working very closely with the Guam Behavioral Health and medical professionals to help those individuals who are addicted to drugs come off their addiction and be rehabilitated and become more productive members of society. So it’s very significant to the lives of our people here.”