Guam – After over a month since the conclusion of the Budweiser Soccer League for most teams, the island’s men are back on the pitch for the 2013 Guam FA Cup, presented by Bank of Guam and Table 35 Restaurant and Bar.

A total of 27 goals were scored in four matches during the opening week of the tournament, advancing four teams to the next round of the bracket while eliminating the respective losing teams.

No. 1-ranked Quality Distributors FC needed over 30 minutes to open scoring in the tournament’s opening match, but convincingly eliminated its opponent, FC Shotguns, 8-0. Scott Leon Guerrero scored on shot from the right side in the 35th minute and eventually finished with a hat trick, also scoring in the 43rd minute and the 62nd minute. Aaron Scott scored twice in the contest and teammates Scott Spindel, Kaito Inoue, and Imry Campbell also scored.

The Paintco Strykers advanced to the next round after blanking the Pago Bay Disasters 9-0. Hiro Asoshina finished with a hat trick and teammate Romaine Loney scored twice. Jan-Willem Staman, Derek Bender and Jarrod Reyes each scored once. The Strykers’ other goal came on a Pago Bay own goal in the 62nd minute.

The Ambassadors earned their ticket to the next round after shutting out the Big Blue Masters 5-0. Mohammed Sahid scored twice in the first seven minutes of the game and teammates Brad Miller, Jeremy Hewitt and Danny Wiltse also scored.

In Week 1’s closest match up, the Crushers FC staved off elimination by edging the IP&E Sidekicks 3-2.

The Crushers tested the Sidekicks defense early on with speedy plays from the wings setting up a few opportunities for Shawn Spindel, Franklin Castro, Kyle Mesa, Jesse Mesa and Joshua Pangelinan.

Nearing the 14th minute, after the Sidekicks prevented a shot by Spindel near the edge of the box, Pangelinan quickly won the ball in the ensuing play and launched his shot into an empty goal to give his team the early 1-0 advantage. The Sidekicks, which finished in second place in Division II of the Budweiser Soccer League, leveled the game four minutes later when Nick Santos connected on a header for goal from teammate Carlo Unpingco’s free kick from the left side. Seven minutes later, the Sidekicks scored again, this time with Unpingco sending in his shot from a Thomas Calvo cross. The Sidekicks were close to three goals in the first half, including one from a penalty kick opportunity, but weren’t able to convert to leave the halftime score at 2-1. 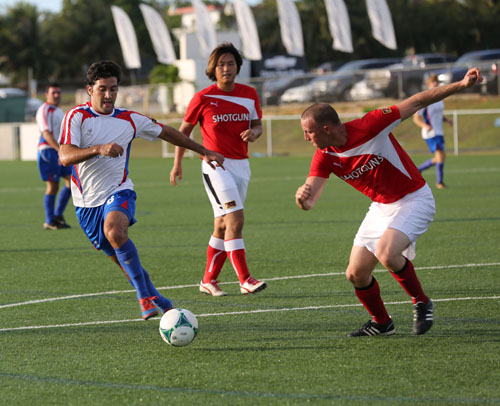 [Crushers FC’s Franklin Castro tries to get past IP&E Sidekicks’ Aaron Unpingco to the goal during opening week play of the Guam FA Cup presented by Bank of Guam and Table 35 Restaurant and Bar at the Guam Football Association National Training Center. The Crushers edged the Sidekicks 3-2.]

Spindel scored the game equalizer seven minutes into the deciding half on a set piece from the left side and later scored the eventual game winner on a penalty kick in the 65th minute.

Despite losing the lead, the Sidekicks continued pressuring the Crushers defense. Aaron Unpingco nearly scored on a free kick late in the half, but the Crushers’ goalkeeper Ryan Shipman leaped with enough height to stop the ball in front of the goal. Gregorio Borja earnestly attempted to follow up on the shot but Shipman was able to slap the ball away before colliding with him. Although Shipman left the game after the play with an injury, the Crushers managed to close down the Sidekicks until the final whistle.

The tournament continues Friday, with the Southern Cobras facing BSL Division II champions Rovers at 9 p.m. Minor revisions were made to the original schedule. The newest schedule is available for download at GuamFootball.com.