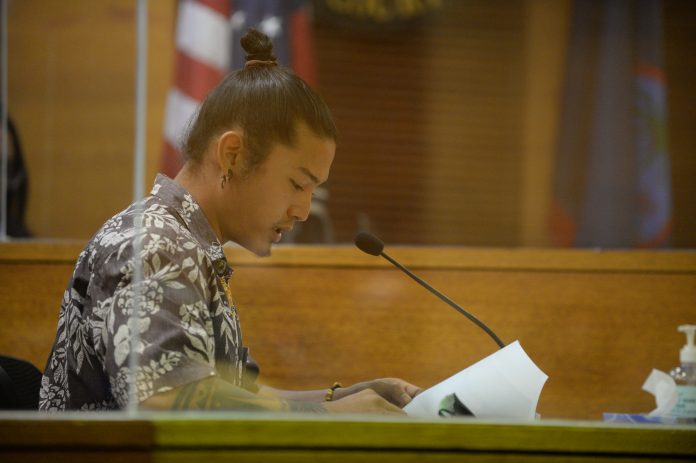 Not much testimony was heard from Hila’an San Nicolas’s testimony today.

Before the jury was called in and before the witness took the seat on the stand, the defense requested that the direct testimony be conducted completely in CHamoru followed by English translator.

Defense attorney Jay Arriola told the Court that he had a CHamoru translator present to interpret the answers of Hila’an.

Prosecutor Richelle Canto objected on the grounds that it will not be equitable for the Court to allow a witness to speak in any other dialect besides English, especially due to the fact that Hila’an provided previous testimony in English.

The defense maintained that it would be unconstitutional to not allow a witness to speak their primary language — citing the Organic Act of Guam.

At the end of the arguments, the Court ruled in favor of the prosecution.

The witness would not testify in CHamoru.

The relevance of Hila’an’s testimony was questioned by the Prosecution, especially about Arriola’s questions regarding Hila’an’s Instagram.

The defense argued that Instagram is a relevant subject in this case because it is the outlet that the victim used to message Hila’an before meeting Frank San Nicolas.

Arriola persisted through the objections, saying that it was through Instagram that the victim was made aware of Frank San Nicolas.

The Court also learned that Hila’an is apprenticing as a Suruhanu under the mentorship of his father, the defendant.

He shared to the Court that he’s been an apprentice for his father his whole life.

The other type of Suruhuanu treats spiritual ailments, like his father.

Among the practices he shared, Hila’an explained was that his father would spread oil on the person’s skin to treat their spiritual ailments.

He testified that his father is the only Suruhanu on Guam that treats spiritual ailments.

The Defense’s Case is still ongoing and more updates from the court will follow as the trial continues.