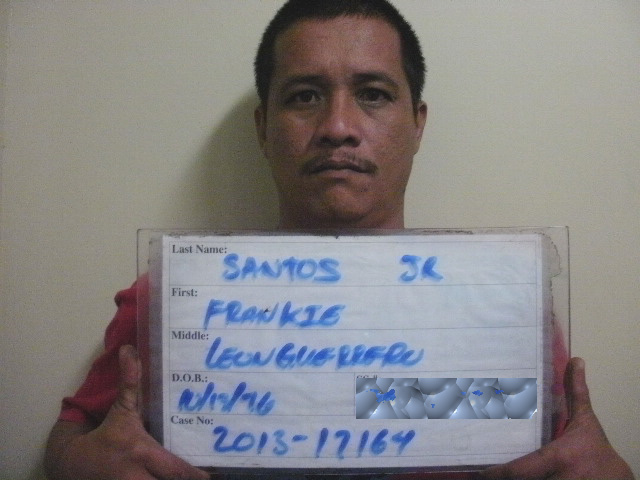 Guam – Frankie Leon Guerrero Santos Jr. is being accused of terrorizing his girlfriend with a shotgun this past Wednesday afternoon.

He was charged in Superior Court Thursday with Aggravated Assault, Terrorizing and Family Violence, including a Special Allegation of Possession and Use of a Deadly Weapon in the Commission of a Felony.

Read the Magistrate report HERE [scroll down, last one]

According to the magistrate report, police responded to a disturbance at a home in Merizo just after 3pm Wednesday afternoon.

When they arrived, the daughter of the victim walked out of the house holding a black Browning Stalker-30 shotgun.  She gave the weapon to police.

Then the victim herself,  Daisy Babauta walked out the front door. The Officers observed “her eyes to be puffy and watery and that she appeared to be distraught .. also noted her body shaking,” according to the report.

She told police that she had an argument with her boyfriend, Frankie Leon Guerrero Santos Jr. in her bedroom. She said Santos locked the bedroom door and began approaching her “holding a brownish and blackish shut gun in one hand.”

“She got scared,” states the report when Santos said “‘So this is it, you don’t want to have anything to do with me anymore.”  She thought “Santos was going to kill” her.

The Magistrate report goes on to state that “Daisy… laid down on the bed and ‘started tearing.’ Santos bent down toward her” and then she noticed the gun laying on the bed to her left side with the end of the gun approximately five inches away from her pointing to the left cheek.” She said she closed her eyes and told Santos “to go ahead and do it. And Santos said “I am, you before me.”

The phone rang, it was her sister calling and Babauta was able to cry out for help. Her daughter than banged on the door and Santos opened it up and Daisy fled from the bedroom. She then told her daughter to get the gun from Santos. The daughter says when she went back into the bedroom she saw Santos take 2 bullets out of the gun and throw them on the shelf. He then gave her the gun which she turned over to police.