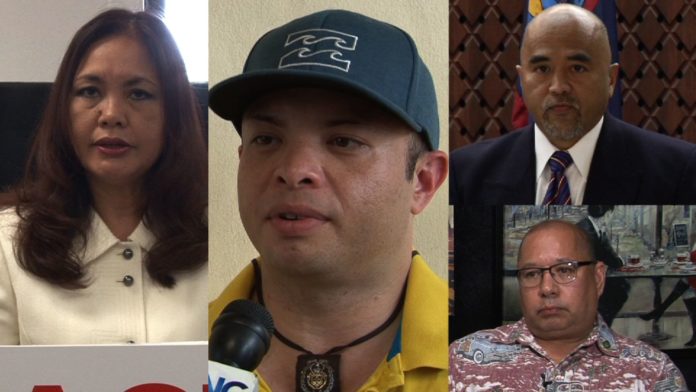 Guam – Another round of corruption allegations are coming from Troy Torres, this time targeting another gubernatorial camp. Torres is claiming lt. gubernatorial candidate Fred Bordallo tried to sweep a high profile prostitution case involving police officers under the rug.

The latest allegations of corruption from Troy Torres are aimed at democrat lt. gubernatorial candidate Fred Bordallo, the former chief of police under the Calvo Administration.

Torres, the former communications director for Governor Calvo, claims Bordallo attempted to sweep a high profile prostitution case under the rug because it involved police officers.

The Blue House case led to the arrest and conviction of the bar’s owner Song Ja Cha in the federal court. During Cha’s trial, police officer David Manila testified and admitted to engaging in prostitution with one of the bar girls. But after the federal trial was over, no charges were being pursued against Manila and other officers whose names came up during the federal trial.

At the time, Bordallo was the chief of police and Torres was the communications director for Governor Calvo. At the helm of the U.S. Attorneys Office was Alicia Limtiaco, who, coincidentally is also running for lt. governor like Bordallo on the democratic ticket.

“The Blue House was gonna be swept under the rug by the chief of police at the time and I’m not sure who else was involved. I know the Attorney General’s Office at the time didn’t wanna touch it within a 10-foot pole. It took the media to make a big stink about it,” claimed Torres.

Torres’ claims are partially correct. The media did, in fact, make a big stink about it after the federal trial was over. Governor Calvo, in one of his addresses, even acknowledged as much. To be clear, we asked Torres if he was specifically referring to Fred Bordallo when he referenced the chief of police to which he answered, “yes.”

But Bordallo tells PNC that Torres’ corruption narrative is completely wrong, putting the impetus on the U.S. Attorney’s Office instead.

“There was back and forth coordination between our department and the U.S. Attorney and Troy was never a part of that coordination,” countered Bordallo.

The Blue House case first surfaced in 2008 under the Camacho Administration with Limtiaco as the Attorney General. It took several years to build a human trafficking case and by the time the case was ready to go to trial, Limtiaco had moved over to the federal side.

“I briefed the governor, gave him a little bit of brief, had a conversation with U.S. Attorney Alicia Limtiaco and I said, ‘So with that disclosure are you intending to do a federal case against Officer Manila?’ And the response I got from Alicia Limtiaco was complete silence; no response,” explained Bordallo. “So I advised the governor when the governor went into ask what was my position on that, I advised him, since Alicia didn’t wanna give me that answer whether the federal [government] was gonna pursue a case against Officer Manila and maybe some officers that are surfacing on the testimony on the ongoing federal trial, I sort of like advised the governor that we gotta take this cautiously and watch because we don’t wanna jeopardize the ongoing federal trial.”

Bordallo says there was constant communication with the AG’s Office that Torres was never involved in. He defends Rapadas’s actions at the time, passing the buck to Limtiaco instead.

“I kinda think Lenny is saying, ‘Why am I cleaning up the mess for Alicia Limtiaco who should’ve taken care of this back in 2008?’ But you know, I think Lenny was really, very supportive and he told me he’ll do his best,” added Bordallo.

As you may recall, local charges were eventually filed against Manila, Cha and two other officers, one of whom pleaded out of the case. Manila and Tony Quenga were sentenced to 30 years each while Cha was given a life sentence. She has since died while serving out her prison term.