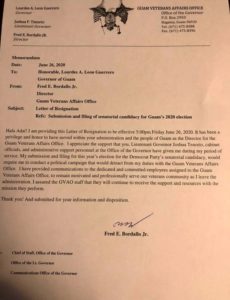 Fred Bordallo has resigned as director of the Guam Veterans Affairs Office to run for a seat in the Guam Legislature.

In his Friday resignation letter to Governor Lou Leon Guerrero, Bordallo explained that his “submission and filing for this year’s election for the Democratic Party’s senatorial candidacy would require me to conduct a political campaign that would detract from my duties with the Guam Veterans Affairs Office.”

Bordallo thanked the Governor and Lt. Governor for their support and stated that “it has been a privilege and honor to have served within your administration.”

His resignation became effective at the close of business on Friday, June 26.