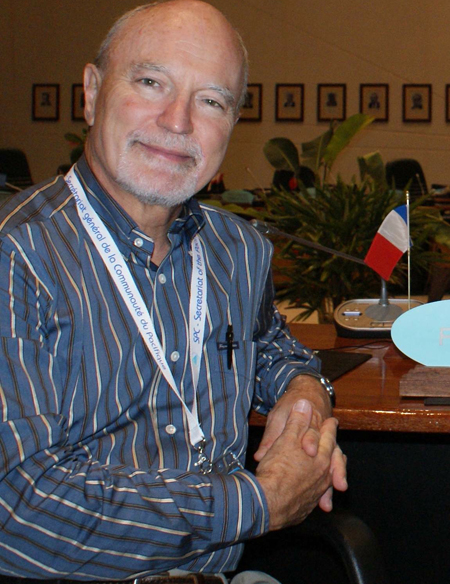 Noumea, New Caldonia –  The distant shores of Europe may seem a world away from the concerns of countries in the South Pacific, yet the European Union maintains a strong commitment to the region.

Of the EU’s member countries, France, in particular, continues to play an influential role in shaping the future of the South Pacific through development aid and the administration of its territories – New Caledonia, French Polynesia and Wallis and Futuna.

The French Government’s Ambassador to the Pacific, M. Hadelin de la Tour du Pin  was one of the delegates to the recent Ministerial meeting on climate change and food security, hosted by regional organisation the Secretariat of the Pacific Community (SPC).

The ambassador also holds the posts of Permanent Representative of France to the Pacific Community, Permanent Secretary for the Pacific Region and Secretary of the Pacific Fund was appointed in June last year.

Before being appointed in June last year, he held diplomatic posts in Guinea, Cyprus, Zimbabwe and Venezuela. His current roles are overseen by the French Department of the Prime Minister, the Ministry of Foreign Affairs and the Ministry for Overseas Territories.

As Secretary of the Pacific Fund, Ambassador M. Hadelin de la Tour du Pin is responsible for managing US$2.5 million, which is used for regional projects that promote social, economic, scientific and cultural development.

“It is a small fund within the Ministry of Foreign Affairs of France, but we contribute for instance through this fund to some of the SPC projects and we also have the French Development Agency, the AFD, and there was (for) the first time the representative for the delegation of the AFD here in Noumea,’’ he says.

Ambassador M. Hadelin de la Tour du Pin believes France continues to make a valuable contribution to the infrastructure and quality of life of its territories, or `collectivities’, as they are officially known.

“In French Polynesia and New Caledonia, we represent more than 500,000 people and a large amount of administrative aid goes to these collectivities,’’ he says.

“For instance, financial transfers from mainland European France to French Polynesia amount to 1.5 billion Euros. So if you have good roads, a good health system, free justice – the police – it is thanks to the French taxpayer.

The French Government is at ease in both European and Pacific spheres and has the distinction of being a founding member of both the EU and SPC.

The ambassador prefers to see France’s role in regional development as being a partner rather than a benefactor.

“I do not like the word donor – we are partners; we are part and parcel of the region. For instance, (there are) our neighbours here close to the SPC Headquarters in Noumea – the European representative delegation – and you have the International Development Institute from France, the RD, which are just neighbours to the SPC headquarters,’’ he explains.

“So, yes, I think it is very symbolic; you have the European part, the French part, because they are one of our biggest research agencies, very present in the Pacific, French Polynesia and New Caledonia.

“I should also mention the SPREP (Secretariat of the Pacific Regional Environment Programme) and through these different channels, we are still very present in the area through this development cooperation, financial aid and also technical cooperation. French Polynesia is prosperous and democratic (and) this also benefits the whole area. Within this part of the world, through the French collectivities and through our own agencies, we are more present than others.’’

Ambassador M. Hadelin de la Tour du Pin is an enthusiastic advocate for the EU and its work in the Pacific region and has a high regard for its achievements in Europe since World War II. In 1945 after the widespread devastation wrought by World War II, the EU was formed with the aim of fostering peace and economic cooperation between European countries.

“The EU, through its African, Caribbean and Pacific (ACP) group of states, is the main contributor in this area of the Pacific,’’ he says.

“If you take into account the state of the European continent in 1945 – it was totally destroyed…Think of Germany in 1945, there were no towns left; I mean there were no roads, there were no trains, there was no more coal, there were no industries, there was nothing. Really, they had to start again from scratch and not only Japan, but … really, Germany and central Europe were destroyed… Think of the reality today, of course, there is a horrible financial crisis, there is unemployment, there are lots of problems, but we are in peace, we are rather rich, we are able to launch rockets through space, we have no more wars.

“It had been a warring continent – remember the wars of the French Revolution, Hitler, Stalin…It was a mess so when we have to evaluate the pros and cons of the European Union, we have to take into account the picture of 1945 and the picture of today.’’