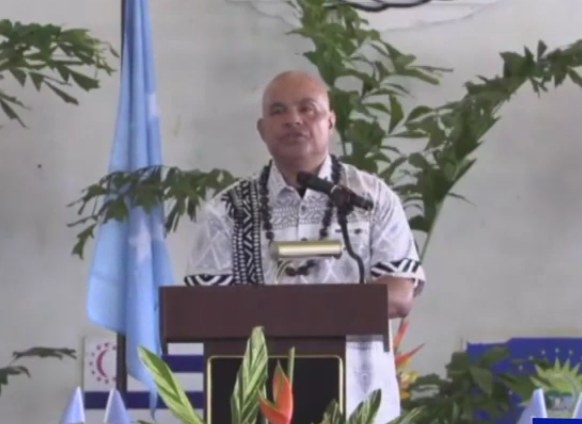 Thirty three years ago, the FSM founding fathers had to navigate a canoe away from trusteeship to independence, according to Federated States of Micronesia President David Panuelo. The FSM’s highest official spoke this morning during the island nation’s independence day ceremonies in Palikir, Pohnpei.

In his speech, Panuelo mentioned the Compact of Free Association which took effect in 1986 and marked a turning point in FSM’s independence.

The FSM and U.S. governments recently started the initial negotiation process on the expiring provisions of the Compact. And Panuelo emphasized its importance to the FSM’s journey toward self-reliance.

“We are making good strides in reaching self-reliance, although there is still much to be done,” Panuelo said.

He added: “The Compact between our nation and the U.S. is the embodiment of a very special and enduring relationship. We look forward to the negotiations proceeding smoothly.”

Panuelo also mentioned the FSM’s Trust Fund in his speech. The Compact agreement included a provision establishing the fund.

According to Panuelo, trust collections will provide the FSM government with revenues after 2023. Trust funding assistance to the FSM expires that year.

He said the fund will contribute to the long-term fiscal self-reliance of the federated states.

Aside from the official gathering in Pohnpei, the FSM community on Guam also celebrated Independence Day with an event this weekend.