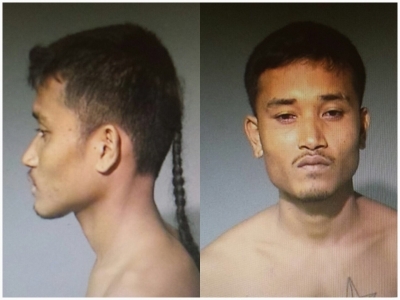 Jay Resgech was apprehended last night at Afame road in Sinajana after a nearly 13 hour manhunt by the criminal justice strike force/k9/ and swat.

Guam – Prior to escaping police custody former fugitive Jay Resgech, who was caught last night in Sinajana, was arrested for allegedly punching his girlfriend in the face repeatedly and then fighting with the manager of the property where Resgech and his girlfriend were fighting.

GPD spokesperson Officer Paul Tapao says”it was a collaborative effort, with the help of the superior court marshals, they were able to locate Mr. Jay Resgech within the roadway of Afame road in Sinajana and this was around 9 pm last nigh. Again on behalf of the Guam Police Department we would not have been able to do this without the collaborative work with all the other agencies that helped us with the search of this arrestee.”

Now details have become available regarding the events leading up to Resgech’s initial admittance and escape from the Guam memorial hospital. According to a magistrates report, on January 6, around 8 p.m., GPD units responded to a disturbance at an establishment in Tamuning. That is when Resgech’s girlfriend, told police that her and Resgech had attended a nieces birthday party where resgech had become intoxicated. She says after she brought Resgech food he, “suddenly got mad” and punched her on the forehead, twice on the right cheek and once on the left jaw. According to the report, two individuals were picking up rent from tenants when they heard screaming from the side of the building. When both individuals arrived at the scene they saw Resgech quote “straddling” the girlfriend. Both witnesses observed Resgech punching her repeatedly on her face. Next, one of the individuals approached Resgech. Resgech turned around and punched the man in the face, all while calling him out to fight. The individual told police that Resgech smelled like alcohol. Officers on the scene observed multiple injuries to both the girlfriend and the individual. According to Tapao, Resgech requested police take him to GMH for treatment.