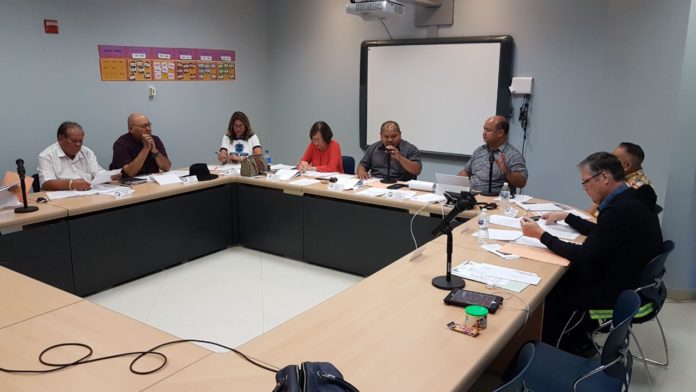 Guam – At last night’s Guam Education Board meeting, the Ad Hoc Committee gave its recommendations of other cost-cutting measures in a worst-case scenario situation, including possible furloughs.

Stating they didn’t want to find themselves scrambling to look for ways to cut costs in the case of another GovGuam budget shortfall, Ad Hoc Committee Chair Robert Crisostomo said they were exploring all possibilities.

Crisostomo said although they were able to find enough savings in Superintendent Jon Fernandez’s Phase 1 cuts this fiscal year, the projected fiscal cliff for next fiscal year was around $140 million. He said since it’s not known for sure what the deficit amount will be next year, nor the contributions to that deficit, the time to plan is now.

Included in their discussion was a possibility for furloughs; identifying how much money would be saved if they delayed opening schools until October 1st; and looking into the closure or combination of schools. On the latter, Fernandez said they would need to identify issues such as teachers pay and the 180 day instructional requirement.

Board Member James Lujan said that although he appreciates the need for GDOE to prepare, he thinks other line agencies also have to do their part.

He pointed out that GDOE is created as a part of the Organic Act whereas other agencies aren’t, stating, “we’re not going to continue to jeopardize not only education, but the livelihood of these students’ households.”

He said when you start putting reconsolidating schools on the table, you’re talking about moving 31,000 kids, which affects their parents and the community.

“We’re the ones who have been proactive in making cuts. Now the other agencies need to be proactive,” he said.

“We can’t bear the burden of the entire Government of Guam,” he added.

Board Member Peter Alecxis Ada addressed the idea of 32-hour workweek furloughs, saying it’s better to be prepared in case they need it, while Vice Chair Mary Gutierrez came out in opposition of that recommendation.

Crisostomo said what he gave were simply ideas and not recommendations for action, adding, “I am a worst case scenario kind of person. I need to plan for that.”

He also said Senators should consider revenue generation before looking at cuts.

Gutierrez, meantime, stressed that these were just recommendations of the Ad Hoc Committee report, and not the position of the committee of the whole.