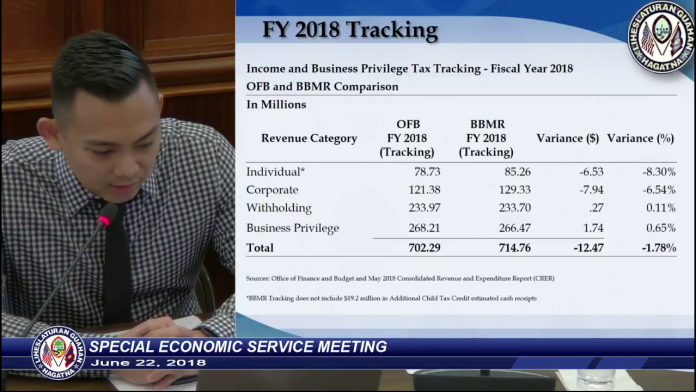 Guam – While lawmakers mull the repeal of a sales tax that hasn’t even begun, they’re also having to contend with a bleak future that projects an even deeper revenue shortfall than what they had originally anticipated.

When the Trump Tax cuts were first announced, Adelup had projected a $120 million shortfall for FY2019, but the Speaker’s Office now says it’s likely closer to $160 million.

The $120 million figure came from the Bureau of Budget and Management Research. It represents their projected revenue shortfall for fiscal year 2019 as a result of the Tax Cuts and Jobs Act. Coincidentally, the number is also the same as BBMR’s estimate of how much GovGuam would collect from a 2 percent sales tax that’s set to take effect next fiscal year.

But with a few months of data collected since the tax cuts was enacted, the Office of Finance and Budget, under Speaker BJ Cruz’s purview, completed their own analysis and their figures show a projected fiscal year 19 revenue shortfall of $160 million.

“In comparison to BBMR’s projection and, obviously we all would prefer that one. I mean, if there’s additional data that BBMR sees that could obviously impact our projection, we’d love to see it and we can hopefully hope for that projection,” said OFB Director Ricky Hernandez.

The threat of an even bigger hole next fiscal year created a sense of urgency in keeping the sales tax in place at today’s Special Economic Service meeting.

It’s been a sore subject for many in the community as 1 percent of the 2 percent sales tax would fund the Guam Memorial Hospital and the Guam Department of Education, which would likely bear the brunt of the cuts as the largest agency.

BBMR Director Lester Carlson then pointed to a recent U.S. Supreme Court decision that could benefit the Guam economy but can only happen if the territory implemented a sales tax.

“But without the godsend from the supreme court that came today allowing for states to begin assessing sales tax on internet purchases, we’re still basically in a situation where we have to make up revenues that we used to be able to count on,” said Carlson. “The good news is that the $118.9 million–I think we’re all in the same agreement that that’s roughly $120 million–that did not include online sales and now that the Supreme Court ruling has come on, then the ability to, first of all, you have to have a sales tax, if you don’t have a sales tax, you can’t avail yourself of being able to get that in because it’s just not something that you can tell Amazon, ‘Oh, can you send me this on top of Senator Espaldon’s order? Oh, I’m sorry, I can’t do that, I’d love to but you don’t have a sales tax.'”

Adding to the discussion, Guam Department of Labor’s Chief Economist Gary Hiles described how our economy could be derailed if we don’t figure out how to make up for the minimum $120 million shortfall.

“If the sales tax was removed and not replaced with something else and there was a $120 million shortfall that required reduction in work hours or layoffs then the employment would and employees wages would decline significantly enough to adversely affect the economy,” Hiles pointed out.

But with an island in poverty, some, like Republican Sen. Mary Torres, believe taxing the people is not the solution.

“What’s concerning me is in looking, is in sitting in all the budget hearings, when we’re looking at a demographic where one-third, more than one-third of us rely on Medicare, [the Medically Indigent Program] or Medicaid for health services, 58 percent of us rely on public welfare,” appealed Torres. “So to just say that we’re gonna make it up by collecting this tax which now is a gift from the Supreme Court decision is not a very responsible course to take coming out of this meeting.”