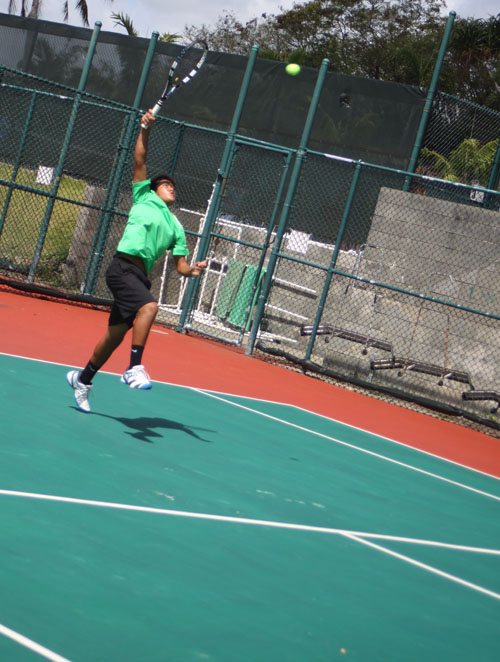 Guam – The Tennis Academy of Guam has announced that Chloe Gadsden and Joshua Cepeda both earned three tournament titles in the finals of the Shirley Lai Memorial Junior Cup 2013 SUNDAY at the Sheraton Laguna Resort and Spa Tennis Courts.

Yesterday’s finals matches saw 15-year old Joshua Cepeda battling in four different matches garnering titles in three of them. In the 16 and Under Boys Singles Cepeda defeated Christopher Cajigan 8 – 3. An hour later he defeated his nephew Brian Tuncap, Jr. in the 18 and Under Boy Singles 9 – 8 (4). Shortly after, Cepeda and Tuncap teamed up in the 16 and Under Boys division to play against Tom Park and Derek Okuhama beating them 8 – 2. In Cepeda’s last finals match, the 18 and Under Boys Doubles, he and his partner, Anthony John, fell to brothers Brian, Jr. and Victor Tuncap 8 – 6.

The tournament featured 70 participants with over 125 matches. The event also hosted the first ever Girls High School Doubles division with eleven teams. Annette Kang and Margaux San Nicolas of St. John’s captured the title with an 8 – 6 win over Camdyn Nadler and Christine Kim from the Academy of Our Lady of Guam.

The next major tennis event for the Tennis Academy of Guam will be the ASC Family Tennis Classic scheduled from April 19-May 12. This will be a full tournament that includes Family Doubles, Skilled Singles and Doubles, Aged, Mixed and Juniors events.