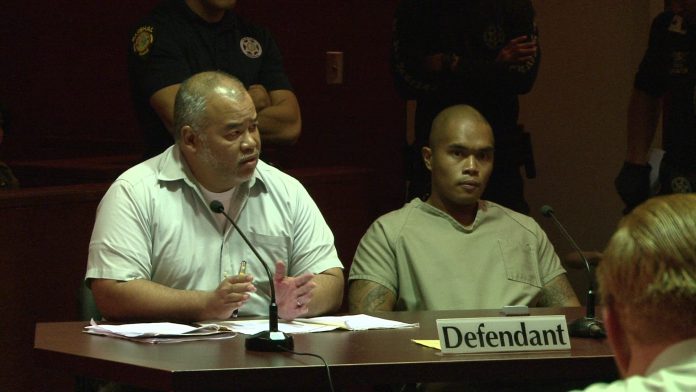 Carl Gargarita had already been convicted of manslaughter in the choke-hold death of Anthony Giralao. However, his conviction was overturned on appeal.

Guam – Carl Gargarita may be getting a reduced sentence if a negotiations on a plea deal pull through in Superior Court.

Gargarita was convicted of manslaughter in the choke-hold death of Anthony Giralao but his conviction was overturned on appeal.

“My client has agreed to a plea agreement with the government,” Gargarita’s defense attorney, Peter Sablan tells PNC.

It would have been Carl Gargarita’s second trial. He even got approval for an expert witness. But now he’s now planning to plead guilty. To what charges, we don’t know.

“I have an idea of what the charges are gonna be but I just don’t know until I see it in the paper,” says Sablan.

Although he couldn’t tell us what the charges his client plans to plead guilty to, Sablan said it would give Gargarita a reduced sentence of three to six years in prison.

When Gargarita was first convicted of manslaughter, he received a sentence of 15 years in prison.

“He has to review the final plea agreement before the change of plea date,” explains Sablan.

The case stems from June 2013, when Gargarita got into a fight with Anthony Giralao, who was his girlfriend’s ex-husband. Gargarita was charged with aggravated murder and assault.

Gargarita did not deny he caused Giralao’s death, but at the time, he claimed he was acting in self-defense.

The jury came back and acquitted Gargarita of murder but they convicted him of the lesser included offense of manslaughter. On appeal, Gargarita’s defense argued that jury instructions were not properly given, resulting in his manslaughter conviction.

The Supreme Court, in a split decision, agreed and overturned the manslaughter conviction for the defendant to be retried.

Initially Gargarita’s case was moving along as though he would get a second trial and perhaps have a stronger defense with the approval of an expert witness.

“For the record I would like to indicate that we suspended our efforts to get an expert because we’ve entered into negotiations with the government. So we didn’t move forward with the request to pay any experts or ask for any expert testimony because of that. We’ve come to a resolution in this matter and we ask the court for a change of plea,” Sablan told Judge Maria Cenzon/.

After the hearing we asked Sablan why his client has agreed to plead guilty.

“He probably has his reasons. I just presented it to him … it was an offer from the government that was proposed so he has agreed to accept it,” noted Sablan.

Assistant Attorney General Jonathan Quan notified Judge Maria Cenzon that the victim’s family has been notified of the plea discussions. However, Quan declined to comment further.

Gargarita’s change of plea hearing is scheduled for April 5th at 10:30 am.