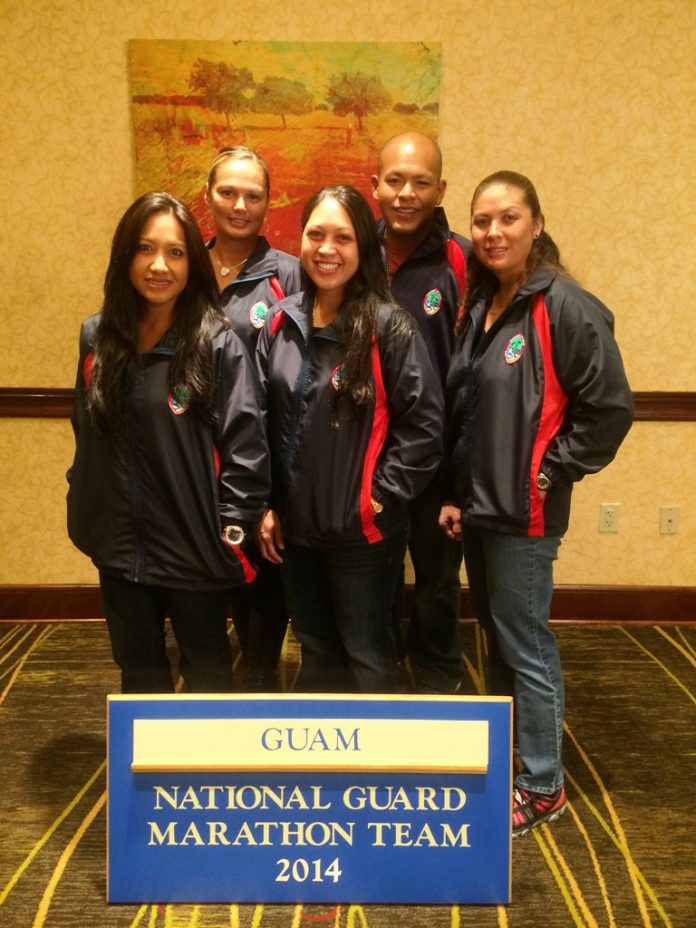 The four Airmen were part of more than 200 Army and Air National Guard members representing 44 states and two U.S. territories, who were all competing for positions on the All National Guard Marathon Team.

The weather was cold, but bearable, as compared to past years. Temperatures in the 40’s opened the race which saw more than 10,000 half-marathoners and about 2,500 marathoners participating in the annual Nebraska race. The weather didn’t seem to distract our runners who are used to running in hot, humid conditions, according to team leader MAJ Josephine Blas.

“The team did outstanding and actually enjoyed the weather conditions,” Blas said. “All runners completed the mission with no injuries, good finishing times, and a renewed motivation for next year’s Lincoln NG Marathon.”

The four runners, all hailed from the Guam Air National Guard, have been training for this for about 9 months.

Senior Airman Roby Garrido, who smashed his previous personal record by more than 30 minutes, finished in speedy a 3 hours, 7 minutes and 24 seconds – good enough to be selected to the All-National Guard Marathon Team – the first from Guam. 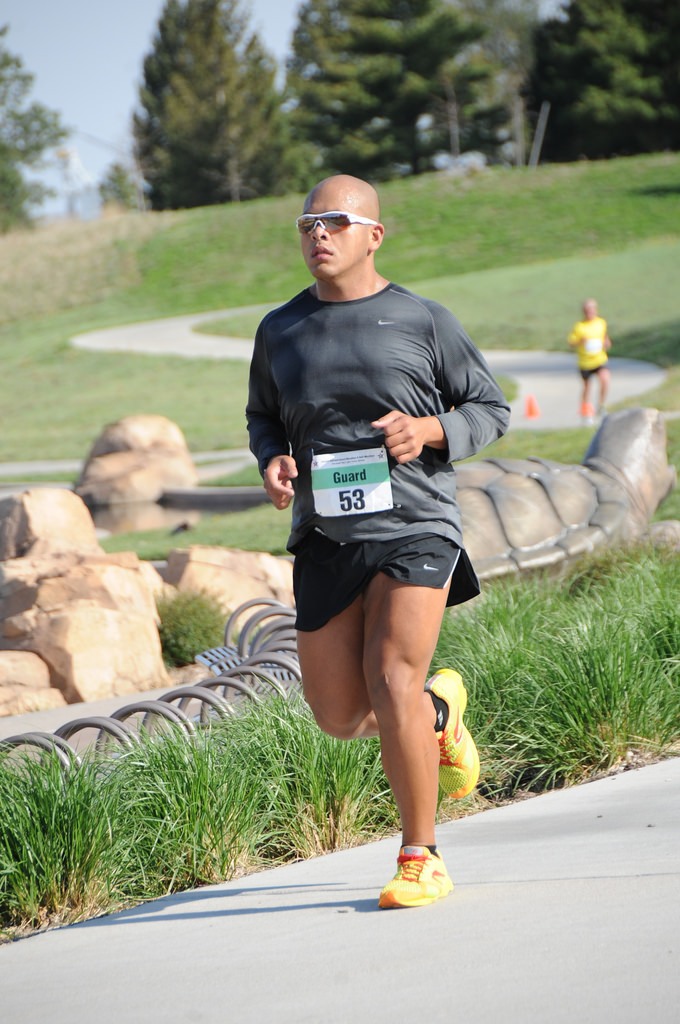 Garrido has completed six marathons beginning with the 2012 Honolulu Marathon and literally hasn’t slowed down. “I’m excited and honored to have been selected and to be able to represent the island and the Guam Guard!” he said smiling!

He lost his father weeks prior to the Marathon, but felt a duty to finish this mission. “I was pretty close to my dad and I wasn’t sure if would be able to go or even wanted to run. I thought about it and realized that my dad would tell me to go for it and give it my all. He was my inspiration throughout my training and I knew that he would help me push hard. During the marathon, I couldn’t explain my energy, but then I realized that he was the force inside me”.

Garrido, from Inarajan, is with the 254th REDHORSE Squadron and encourages all aspiring runners to “run and live happy and never give up!” Although the loss of his father weighs heavy on his mind and in his heart, Garrido looks forward to the birth of his son this July.

“Family is everything and I wouldn’t be anywhere without my daughter, Makayla, and my girlfriend Alexandra. Like the circle of life, I will always have the memory of my Dad as I continue to run and raise my kids!”

Since Technical Sergeant Barbara Tayama of the 254th Air Base Group (ABG) has begun running the grueling 26.2 mile race, she has completed 31. She made the commitment while returning home from a TDY. “I saw runners wearing the Honolulu Marathon “finisher” shirts and decided I wanted to do it”, she said. She immediately began training and completed her first, the Honolulu Marathon, in 2006. To date, her personal best is 4 hours, 35 minutes and 59 seconds. 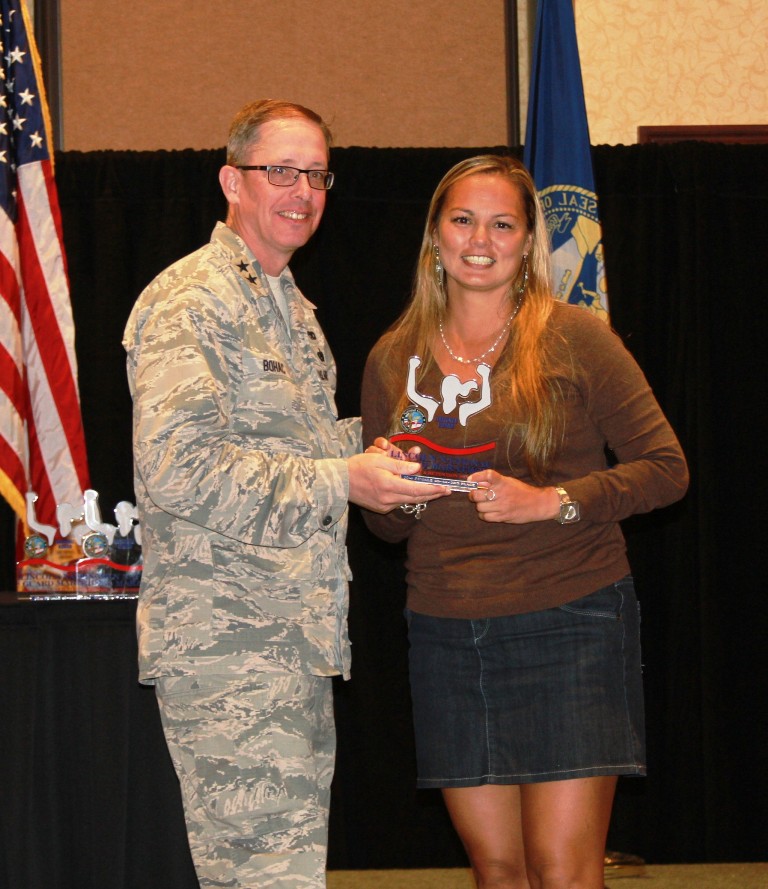 “Everyone has different goals when running a marathon”, she stresses, “but if you set a realistic goal and put in honest effort to achieve that goal, you will finish and still be smiling!”

Staff Sergeant Tara G. Taitano, also with the 254th ABG, from Yigo, only started running about six years ago and has completed 9 marathons to date. She credits her parents, long-time island runners Christine and Joe Taitano, fellow Airman TSgt Barbara Tayama, her boyfriend, Joe Rabon, sister Melissa Taitano and the Koko Running Group as the ones who encouraged her to pursue long distance running and continue to support her through her accomplishments.

Taitano completed this year’s race in 4 hours, 13 minutes. The motivation to succeed as a runner, according to her, comes more from inside her.

“It’s the drive and experience of finishing a marathon and accomplishing a goal that is the motivator to succeed in running. There is something great about the feeling of working hard at something and seeing it pay off,” says Taitano.

Master Sergeant Jaclyn N. Paulino, with the 254th Force Support Squadron, said her family, friends and team members continue to be her inspiration to run a marathon. She finished in 4 hours, 49 minutes and 22 seconds.

“My family continues to be my backbone and support since I began running. They help me through the challenges I face as a runner. Running has now become an addiction. It is like morning coffee that helps me with deal with daily stresses and rejuvenates my emotional wellbeing.” Paulino has now completed 14 marathons and doesn’t plan to stop.

“The feeling of completing a marathon is indescribable and very powerful,” Paulino added. For those that doubt their abilities to run 26.2 miles, she says that you just need to “believe in yourself and never give up!”

For team leader Blas, Public Affairs Officer and ESGR Officer, the responsibility of leading the Guam Guard team to this year’s race was exciting. “It was easy because the Airmen did all the heavy lifting, or running in this case. I was amazed at seeing the more than 12,500 runners, of all shapes, sizes and ability levels, out there running and getting to the finish line! They had a goal and they completed their mission! It’s very inspiring! And yes, I plan to be one of those runners next year!”

Next year’s National Guard marathon will be in May of 2015. Interested runners should break out their shoes and begin logging in their miles.