GCA Trades Academy will present level completion certificates to students on Wednesday, Nov. 3, at 11 am.

The venue will be the GCA Trades Academy Tiyan Training Facility at 506 Mariner Avenue in Tiyan (next door to the Department of Education main office).

Founded in September 2006, 4,200 students have been trained at the GCA Trades Academy. 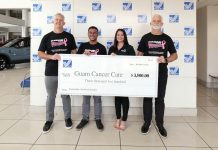