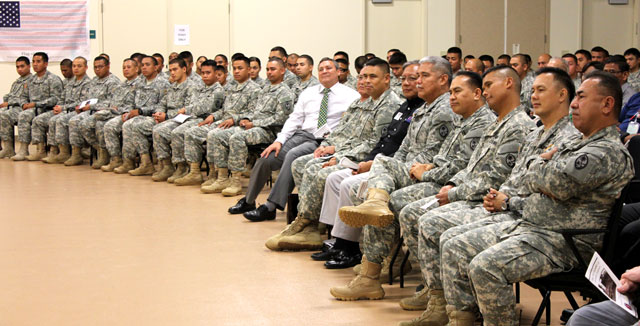 Guam –   “Don’t stop now.” That was the message of GCC President Mary Okada to 152 Guam veterans during a ceremony marking the completion of the Keep Your Guard Up program at the National Guard Readiness Center on July 8th.

Keep Your Guard Up is the first program of its kind anywhere in the United States. It was implemented after Guam National Guard Adjutant General Maj. Gen. Benny Paulino informed Guam’s leaders last year that of the 588 men and women of the I-294th Infantry Regiment deployed to Afghanistan, a full 260 of them would be returning home in January 2014 either unemployed or under-employed.

[152 Guam Army National Guard veterans, flanked by Gov. Eddie Calvo, Maj. Gen. Benny Paulino, their commanding officers and guests, attend a completion ceremony after having earned employable skills through the Keep Your Guard Up program sponsored by GCC, the Governor’s Office, ESGR, the Guam Chamber of Commerce, the Guam Dept. of Labor, and AHRD.]

While the soldiers were still in country, GCC surveyed them and formulated a 90-day industry certification program in eight areas: automotive general service technician; A+ computer networking; electrical; emergency medical technician; heating, ventilation and air conditioning (HVAC), supervision and management, heavy equipment/truck driving, and welding.
Yesterday the 152 soldiers in the program earned enrichment certificates for having gained employable skills, and depending on their program of study, some also earned completion certificates, National Career Readiness Certificates and valuable industry certifications. Okada encouraged them to continue with their studies at GCC. “Some of you are only a few credits away from your degree or certificate,” she said.
Victor Rodgers, GCC asst. director of Continuing Education & Workforce Development, told the veterans, “Your obligation is simple; as the first ever to go through such a program I need every one of you to be the standard-bearers throughout the community. Seek every opportunity to be a leader, and give back,” he told them.
Employers DCK Pacific, Cabras Marine, Cars Plus, the Guam Fire Department, and even GCC have hired several dozen of the KYGU veterans, and others have already signed up to take courses at GCC for fall semester.