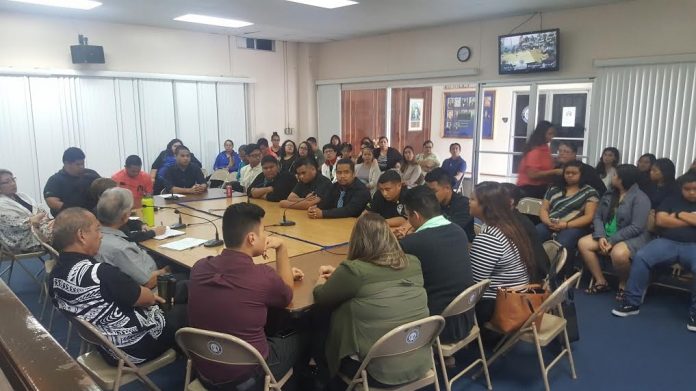 …but that it’s a good place to start.

Guam – It appears most students at both the Guam Community College and the University of Guam applaud their schools’ efforts in strengthening their policies against sexual harassment or sexual misconduct.

GCC Student Kaeolani Claros says, “I believe that the policies empower students and that there is a purpose for the policies, to recognize, to report and to know that there are consequences for sexual harassment.”

After both the University of Guam and the Guam Community College updated their sexual misconduct policies, Speaker Judi Won Pat invited student representatives at both higher institutions to a round table discussion to find out what’s really happening at the colleges and what students think of the new policies.
UOG SGA Senator Daryl Navarro expresses, “I don’t feel afraid. If someone was above me, I can report them and I can say ‘someone has my back’ instead of just running away because I do have a friend that was sexually harassed by a professor and she didn’t report it because she’s very afraid. I feel with this new thing, I  feel like students shouldn’t be scared.”
Although all the students at the round table were very supportive of the sexual misconduct policies, a few also said…the policies aren’t enough but that it’s a good place to start.
UOG Student Elvin De Leon says, “I don’t think it’s enough. It’s a great start definitely but we should take more steps in reinforcing or strengthening it so no one else has to become a victim. When a person falls victim to one of these actions, the victims typically stay down low. Most of the time, they won’t come out. Like my peer, he mentioned he’s still trying to get a student to come out. As a student who has a female sibling going to UOG, it’s one thing to be going to school, it’s another thing where I have to worry where my sister is.”
Some students suggest that the schools should have a program or some sort of organization that would help empower victims to speak out.
GCC Student Joey Aguon says, “Let’s give them a better opportunity and to build their self-esteem and self-confidence, those are the two biggest reasons why these people don’t come forward. They don’t trust these people.”
All incoming and current UOG students will have to take a Sexual Misconduct training in order to register for classes in the Fall semester. Alongside the sexual misconduct training for staff, faculty, and students, both GCC and UOG will also be conducting campus climate surveys.