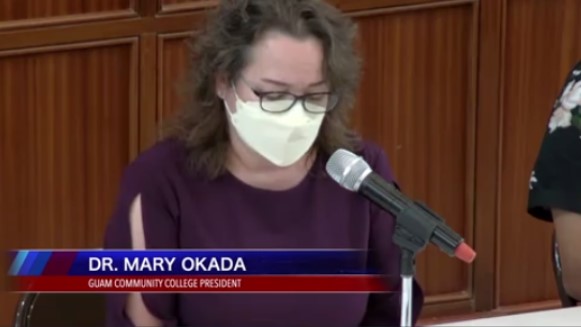 Today, GCC’s board of directors had requested for a larger budget this upcoming fiscal year.

This new budget would help the increase cost of personnel due to the anticipated retirement benefits and health insurance cost that increased in fiscal year 2022 and the new budget formula for this year which has increased by 1.3%

The rest of the funding will be used for capital projects and investments in stocks and securities.

Senator Telo Taitague had a few questions for the panel about fundings from past years.

The money has been earmarked and will be used for future needs.

And under the general funds certain employees were given raises to put them in certain percentiles, while the non appropriated funds for the current year is used to support and supplement the general fund operations in addition to capital projects, said Dr. Okada

Senator Taitague added that she would like to see the numbers they received from non appropriated funds from last year in the near future to see if there are any leftovers.

Among the senators in attendance, Senator Joanne Brown pointed out that although the circumstances on how we were able to receive these funds are unfortunate we continue to see the trend of government agencies increasing their salaries at this time.

In the beginning of the hearing , the GCC representatives listed their accomplishments throughout this year which included various bootcamps, modifications of courses for student success and more.

Senators in attendance had said their pieces about the budget plan presented but did not disregard GCC’s hard work.

The budget is still not confirmed at this time and is up for discussion.