Guam – Guam Community College is mourning the loss of Ray Rojas who was killed in this morning’s fatal traffic accident in Mangilao.

Rojas died when his SUV slammed into a power pole just before 5:30 am in Mangilao, right in front of the Santa Teresita Church on Route 10. He was 50 years old.

Rojas was the manager of GCC’s bookstore. GCC spokesperson Jayne Flores says he had worked at the college for 21 years and was active in community sports, playing for the PacSports Giants.

“This is a really tragic day for GCC,” said Flores. “We’re all shocked and saddened at the news of Ray’s death. He was just a great guy … very jovial, everybody loved him.”

Read details of the accident

Last year, Flores said that Ray and his wife won the GCC Golf Tournament. “We just can’t believe this news.” 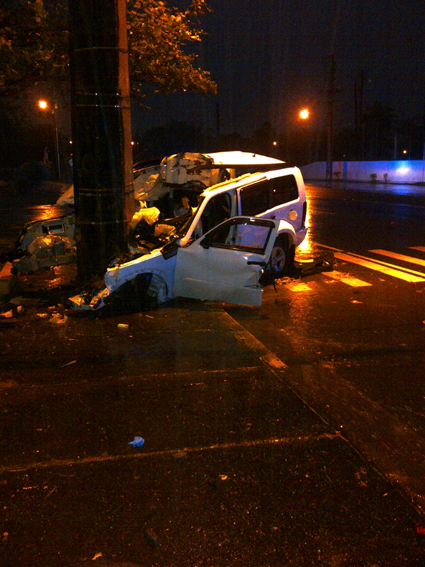 Rojas’s death is the third traffic fatality of the week, and the fifth this year on island.

Guam Police Chief Fred Bordallo urged drivers to follow posted signed and drive slow. He told PNC News “Drive safely, there is no rush to get to work,” he said. “Its never good to increase your speed, because the higher speed will increase your chances of getting hurt.”

Rosaries are being planned, the first one will be held at 6:45 pm this evening, at the Santa Teresita Church, outside of which he died this morning.