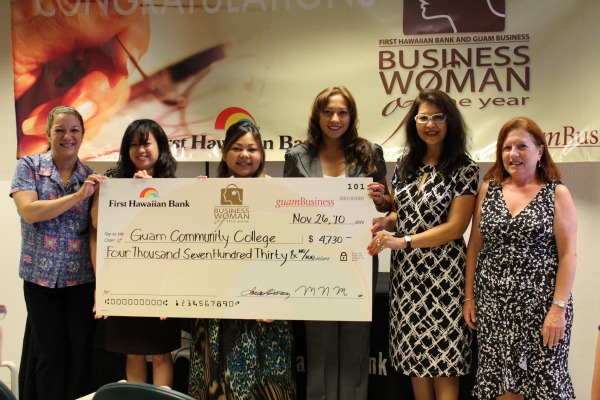 Guam – Guam Community College is extremely proud of the three students that were today awarded Businesswoman of the Year scholarships by First Hawaiian Bank and Guam Business. Stacie Ann C. Duenas, Colleen R. Punzalan, and Carolyn M. Sanchez each received a scholarship award of between $1,430 and $1,650 in recognition of their scholastic achievements today at a ceremony at First Hawaiian Bank Maite Branch.

Duenas, a sophomore majoring in accounting at GCC, is the past president of the Phi Theta Kappa Beta Beta Xi Chapter at GCC. PTK is the honor society that recognizes and encourages the academic achievement of two-year college students, and provides opportunities for individual growth and development through participation in honors, leadership, service and fellowship programming.

Punzalan, also a sophomore accounting major, is the current president of PTK. Both women are active in leadership and service learning projects at the college.

Sanchez, a sophomore in GCC’s Pre-Nursing program, is a fellow PTK member, and a recipient of the Hawaii Pacific Islands Campus Compact (HPICC) 2010 Community Impact Award for a homeless community service project she initiated in Fall Semester 2009. Her effort to deliver food and supplies to homeless people during the holidays was publicized on the front page of the Pacific Daily News, bringing awareness of the issues facing Guam’s homeless population to the community.

“We are tremendously proud of Stacie, Colleen, and Carolyn. Their accomplishments are an indication not only of their personal strength as young women and the quality education they are receiving at our institution, but also of the positive contributions they will make to our community as successful professionals once they graduate,” said Dr. Mary Okada, GCC president.

According to a Guam Business media release, GB and First Hawaiian Bank today awarded a total of $19,550 in BWOY scholarships. In addition to the three scholarships awarded to GCC students, four students from the University of Guam and three from the Northern Marianas College were also awarded scholarships. The scholarships were awarded based on the recipients’ total number of credit hours enrolled in the fall semester, their grades, involvement in the community and potential to become successful businesspeople. All applicants were required to submit a written essay and evidence of financial need. Funds for the scholarships are raised through the annual Businesswoman of the Year Gala, which recognizes women who make a difference in business. Applications are open to both full-time and part-time students of the three educational institutions.