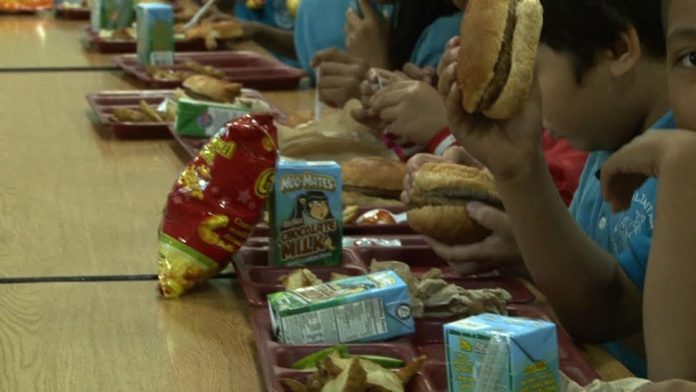 The Guam Department of Education decided to re-new their food services contract with Sodexo but Sodexo will have some help from the locally owned Global Food Services. With only a week away from the first day of school, will they be ready?

Guam – The countdown begins for the start of the school year. DOE just announced this morning that Sodexo will continue to provide food services for 37 DOE schools, but they also announced a new partnership and a new menu.

DOE Superintendent Jon Fernandez says, “We’re very excited to announce today that the food services contract for the coming year, and potentially for the next five years. The contract was awarded to Sodexo.”

The Guam Department of Education announced that Sodexo will continue to provide food services to about 30,000-plus public school students in 37 out of 41 DOE schools. Sodexo was the previous food services vendor for DOE for the past four years, but DOE’s decision to renew their contract comes with changes such as new menus that will add another entree to its offerings, provide more local flavors, add salad bars at secondary schools, and incorporate more produce from local farmers.
Fernandez says, “The additional entree is going to be helpful. There will be more focus on trying to provide locally themed food and flavors within the nutritional requirement but at least something the kids are familiar with at home and we’re going to do a lot more to work with Sodexo to give information to the community and being present so parents can ask about school meals.”
Another change is Sodexo’s partnership with Global Food Services, Guam’s largest locally-owned food and facilities company. GFS also owns and operates Ruby Tuesday, Chuck E. Cheese, Domino’s Pizza and King’s on island.
Sodexo Resident District Manager Michael Schnitger says, “We’re happy to be continuing our partnership with GDOE and providing nutritious meals to the students as well as looking forward to servicing the community especially with our new partner GFS.”
GFS Group Vice President Cliff Guzman says, “Sodexo has got a great team out there. Our job here is to provide support and help them with conceptualizing and whatever we can to make it work. What we can do is focus on the most nutritious and health breakfast and lunch as possible. That’s what the end game is.”
Fernandez encourages more students to take advantage of the school food, but says it has been a challenge after changing the menu slightly to follow the U.S. Department of Agriculture’s nutritional guidelines. He says, “For some of our families and students, that change has been a little bit disruptive to them because some of the foods they’re just not familiar with and they were used to bigger portions or saltier foods or fried foods. That’s
been a challenge for us and other districts.”
Fernandez says he wants to get more involved with the community and educate families about the role of nutrition. He says, “Our effort is to be more visible, more transparent and seek more community feedback as we go forward so we can continue to make those improvements to ensure our kids are eating healthy at our schools.”
DL Perez Elementary, J.Q. San Miguel Elementary, Ordot-Chalan Pago Elementary and Okkodo High School will continue to be managed directly by GDOE. In addition, six more schools will implement the Community Eligibility Program, which is a federal initiative that allows all students at eligible schools to eat breakfast and lunch at no cost. This will bring the total number of CEP schools to 27.