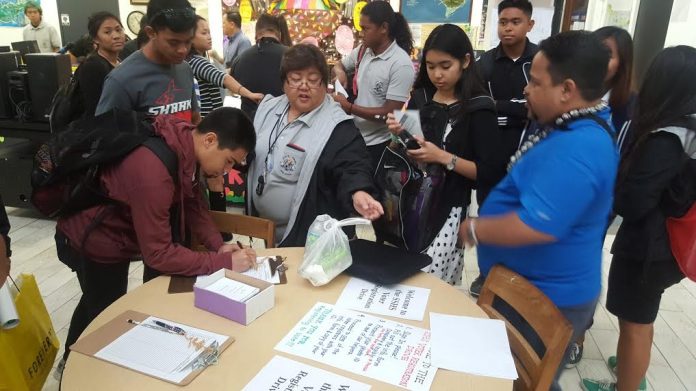 This is just the first of many voter registrars at the schools.

Guam – The Guam Department of Education is encouraging the younger generation to have a voice and make known the issues that matter to them. Starting with Simon Sanchez High, a new voter registrar will be posted at the schools so students can conveniently register. Just in the first day alone, the home of the sharks registered about 40 new voters.

“So we’re here at Simon Sanchez High School today. They set a goal of registering 500 new voters right here at school. It’s part of our drive this year at the Guam Department of Education. Hopefully, we’ll be able to generate activity, get some momentum and ensure that this generation that’s coming out of high school is ready to participate in our community” says Fernandez.

Fernandez says GDOE is even getting attention from stateside schools. “We got people out in the states who’ve reached out to me who said ‘wow you reached out to the schools’ and they’re impressed. Our goal could be around 1200 new voters. I said well, come back and let’s see how we do,” says Fernandez.
We asked a couple of students how they felt after registering to vote.
SSHS Student Jordy Esiwini says, “I feel good now that I get a chance to vote for the people who can help our island and community.”
Meanwhile, SSHS Student Racquel Villegas says, “I think they should get involved because it’s our future. All the rules and things that they’re going to do in our world. We should be aware of what we want and what they should do.”