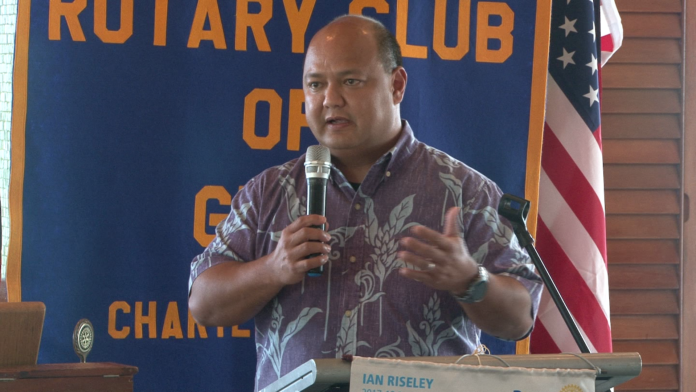 Guam – Superintendent Jon Fernandez expressed frustration with mounting pressure being placed on the Guam Department of Education in light of the fiscal shortfall facing GovGuam as a result of the Federal Tax Cuts.

GDOE developed a 3-phased plan that Fernandez highlighted during this morning’s Rotary Club of Guam meeting. Phase 1 immediately increased savings by foregoing spending. Phase 2 would have save the department $2.8 million but put a freeze on hiring for open positions while Phase 3 examined the possibility of furloughs, with a 32-hour work week.

In light of the recent bill passed by the legislature and signed into law that will increase the business privilege tax and implement a sales tax, Fernandez, again, expressed his support for the BPT as well as the anticipated fiscal realignment plan.

“I think there’s a lot of pressure being placed on the education department, right? And I think that pressure is around the notion that you’ve been prioritized in the Organic Act, you’ve been prioritized in the Adequate Education Act, at some point you need to stop cutting and just let the elected officials do what they need to do to figure that out,” said Fernandez.

Also discussed during the Rotary meeting was the subject of Guam’s charter schools.

“Again, we saw that there were students coming from the private school sector, and then funds being pulled from GDOE’s budget to go and support that, and that didn’t make sense. If public schools grow as a whole, traditional and charter, then you would anticipate the overall budget for public education would grow by that amount and not simply taking from ‘Peter to pay Paul,'” Fernandez said.

The meeting was held at the Pacific Star Resort & Spa.