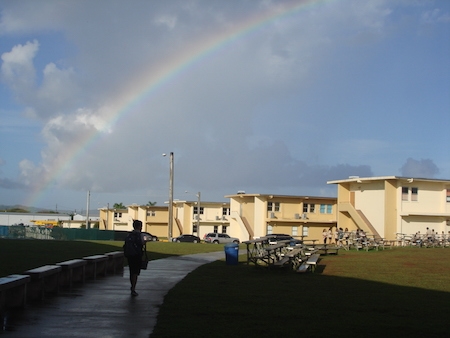 Anderson says an evacuation was not needed and the offices were not disrupted by the threat.

Guam – It may be Spring Break, but the Guam Department of Education headquarters is busy responding to some sort of threat.

According to GDOE Acting Deputy Superintendent Chris Anderson, on Tuesday, a credible source provided information about a possible threat to central office employees. Based on that information and after meeting with management at the department, Superintendent Jon Fernandez decided to increase the threat level at the GDOE headquarters in Tiyan to medium risk. Since Wednesday, the central office employees have been monitoring the cars entering and exiting out of the gate, manning the reception desk, and reviewing emergency procedures and supplies.
Anderson describes it as…”all for the purpose of being proactive and just ensuring that if that threat is an issue, that we’re able to address it at the gate and not here in the offices. There is no specific threat to anybody here at the central office. We’re at regular operations and just increasing our protective factors and making sure nothing does happen.”
Anderson says an evacuation was not needed and the offices were not disrupted by the threat.