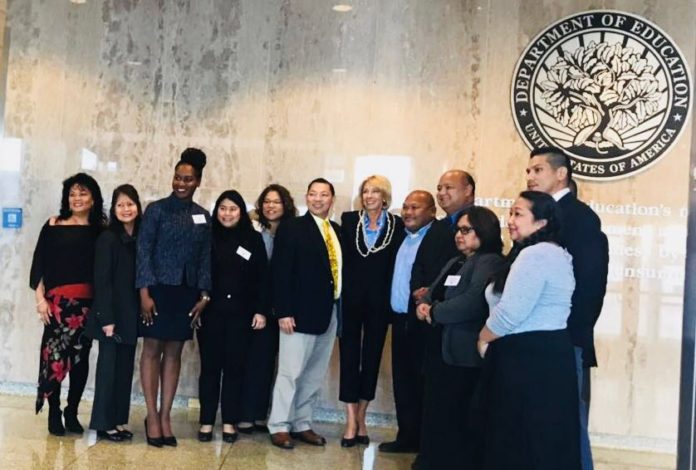 Guam – Guam Department of Education officials met with USDOE officials to discuss the possibility of removing the special conditions imposed upon them, one of which requires a third party fiduciary agent.

During their meeting, Betsy DeVos made an appearance, giving GDOE a chance to voice their concerns directly with the Secretary of Education.

If GDOE’s request to remove the special conditions imposed by the USDOE since 2010 is approved, it will save the department about $3 million a year that’s paid to their third party fiduciary agent Alvarez and Marsal.

GDOE Superintendent Jon Fernandez, Guam Education Board Chairman Mark Mendiola and Chief Internal Auditor Franklin Cooper-Nurse, along with other GDOE officials met with USDOE high ranking members in Washington D.C. where they notified USDOE of their intent to ask for the removal of the special conditions.

These special conditions were imposed in 2010 after years of failed audits. GDOE was designated a high risk grantee in 2002.

Fernandez says they would create positions within GDOE that would mirror the work of Alvarez and Marsal.

“What we’re doing is we need to be in a position to move that special condition and in place of it, we would then assume that role so that all the things that the third party fidiciuary is doing, we need to be able to demonstrate where those activities reside within the agency,” noted Fernandez. “One of the ideas out there is to simply replicate the third party unit, bring it internal on a local pay scale with GDOE employees and make sure that we have highly skilled people to do that.”

During the meeting with high ranking USDOE officials, Secretary of Education Betsy DeVos made an appearance, although a brief one. This gave GDOE an opportunity to share their concerns directly with the education secretary, one being that GDOE has made significant strides in improving its audit conditions but because of the special conditions and a boiler plate letter, these improvements are not officially acknowledged, making it challenging for GDOE whenever they appeal for more funding from the Legislature.

GDOE will be submitting its request within the next two weeks and hopes to have a response by July 1 for the removal of the special conditions.