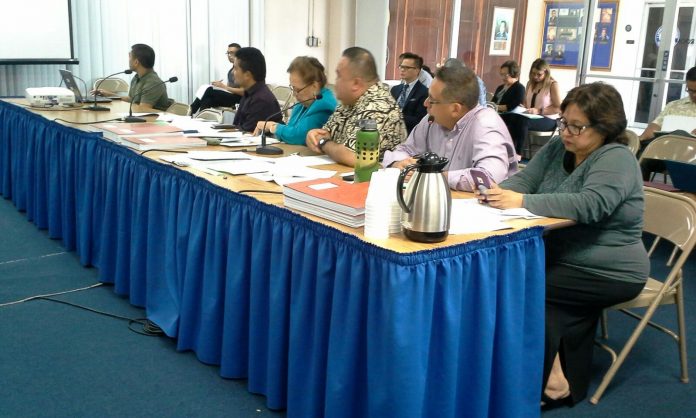 This is a $93.8 million increase over the department’s FY16 appropriation.

Education Oversight Chair Senator Nerissa Underwood says the Guam Education Board’s decision to grant Fernandez leave in such a crucial time is questionable. However, Acting GEB Chairwoman Rosie Tainatongo explains that she thought it’d be best to take Fernandez out of the situation.

Underwood explains, “Mr. Superintendent Fernandez is being paid $150-thousand dollars a year. This is one of the most important functions of the Superintendent and I believe that you and I know that. So I just wanted to express my disappointment over your decision.”
Tainatongo replies, “I just decided that since I was informed that the investigation is going on, he really should not be at the department.”
As for GDOE’s budget request, for Fiscal Year 2017, the department is asking for $326 million dollars, which is a 40% or $93.8 million increase over the department’s FY16 appropriation.
According to documents presented at the hearing, the budget can be broken down to 68% personnel, 23% operations which includes contractual services, supplies and equipment, 5% utilities and 4% capital outlay.
To go even more in depth,
$257 M – will sustain a baseline level of operations
$14 M – covers additional investments in student achievement
$28 M – will improve student health and school safety ($10 million in the first phase of capital improvement repairs or projects at 37 schools)
$4.6 M – replacement classroom equipment
$696 K – in additional facilities and maintenance staff support
$4 M to facilitate additional efforts in removing GDOE’s high-risk designation
$22 M – address contracts, prior year obligations.
GDOE says there were a number of events that impact GDOE’s requested funding, one of which is a Territorial Facilities Fund shortfall in GDOE appropriations of $2 million in FY15. According to the May 2016 Special Funds Tracking report, TEFF collections through the end of the fiscal year are projected at a $700k shortfall.
GDOE Deputy Superintendent in Finance Taling Taitano says they’re waiting for $27 million from the Department of Administration.
Cruz says, “BBMR has released $187 million and DOA has paid us $160 million. So with $160 million, you’ve managed to open and close a school year and almost get ready to open another school year, but you’re asking for $325 million for this year…”
Taitaino replies, “Again, as we put the budget together, we took input from our stakeholders. We took a look at the Adequate Education Act and using all those different things, we came up with that amount. Obviously, we’re not meeting all our mandates.”
Vice Speaker BJ Cruz also questioned two expenses: FestPac and the new GDOE headquarters in Tiyan. He says, “On what authority is that money expended? Who certified those funds to be expended? What category?”
Taitano says, “Basically, what we tried to do is not expend additional funding. I understood that FestPac committee would pay as back for additional funding.”
As for the new GDOE headquarters being constructed in Tiyan…
Cruz asks, “Why wasn’t the current GDOE office adequate and insisted on building brand new offices?”
Taitano explains that GDOE is not part of the negotiations with CoreTech and the Tiyan property and that CoreTech deals directly with the Governor’s Office.
Cruz says, “With the fact that the Government of Guam has a FY15 cumulative general fund deficit of about $120 million. Now more than ever, we all have to understand that increasing expenditures against potentially declining or flat levels may not be realistic. We may all have to come to that realization now or sometime in the future.”