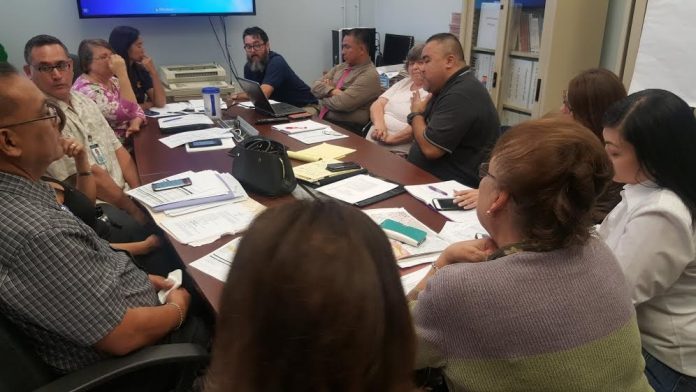 Senator Underwood says the round table meeting reassured her that DOE is taking significant steps to address the safety concern at the schools.

Guam – “The first thing he said to me was “I’m not crazy grandma.” It’s the thought of seeing them. It makes him humiliated because he was beaten bad, the one with his face messed up. There were other children that were attacked after their incident and that’s why my main concern is what’s happening in our schools today, it needs to be corrected. They need to do more about suspending these kids,” says a concerned grandmother Elaina Garcia.

Garcia voiced her concern about the safety of her grandchildren at Tiyan High School at a roundtable meeting with Senator Nerissa Underwood, the Guam Department of Education, and law enforcement officers. Garcia says her grandson fears for his safety every day he’s in school and can’t focus on his education.

According to a DOE document, currently at Tiyan High, there are six school aide positions and four borrowed positions. Because of this lack of school aides, DOE is requesting for eight additional positions in the FY17 budget.

Senator Nerissa Underwood who called for the roundtable meeting says that’s the community’s main concern: the lack of supervision at the schools. Underwood explains that it’s a mix of getting more school aides or Security Resource Officers, implementing more training for personnel, and strengthening the systems in place.

“We go back again and we’re going to re-examine where we may have dropped the ball again so we can strengthen the system. I think a permanent fix is really making sure we have a system in place. Children are going to be children just as adults are. In every situation we are dealing with individuals who need to learn how to deal with conflict,” she says.

Fernandez says one of the programs they’re implementing at the schools is the Positive Behavioral Interventions and Supports or PBIS. The goals of the PBIS include the objectives that by SY2016-2017, all schools will have a discipline rate of 15% or less and that all schools will have a perception survey that measures stakeholders perception of the extent to which they are safe, positive and supportive. According to DOE, during SY2014-2015, 36 schools participated in the implementation of the PBIS framework.

According to GDOE district psychologist Nadine Cepeda, only about 15-20% of students are what they call high risk. These are the students who have 3 to 5 office discipline referrals or 6 to 9 unexcused absences.

She says, “There’s a 15 to 20% who are high risk children who have problematic behaviors. Those are the ones we want to target. Coming into this, we’re limited to resources however the counselors have master’s degree and need training. I proposed to the Superintendent that we need to capture those 15 to 20%.”

GPD Officer Paul Tapao says he does see a difference at the schools since the implementation of PBIS. He says, “If I could speak as a testimony of the effectiveness for the PBIS, I’m starting to see it from a law enforcement standpoint. With the recent bomb threats, we’re getting a lot of calls from students wanting to make a difference by providing information to our Juvenile Investigators. We see a lot of kids coming forward and taking responsibility for their school.”

Underwood says the round table meeting reassured her that DOE is taking significant steps to address the safety concern at the schools.