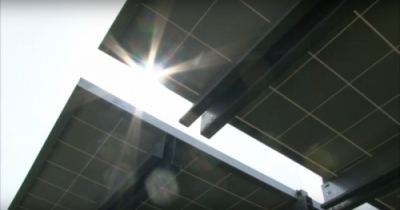 GDOE Superintendent Jon Fernandez says that the contract will now go to the attorney generals office and they to the governor for approval.

Guam – It’s official, with the Guam Power Authority and the CCU finally on board, four Guam public schools will be jumping off the grid and going solar.

The CCU unanimously passed the resolution approving GDOE’s pilot program for solar panels to be installed at four schools. GDOE has entered a power-purchasing agreement with the Guam Educational Financing Foundation based on a pilot program. Four schools– Okodo high, Astumbo Middle School, Liguan Elementary and Adacao Elementary will receive solar panels and begin to run off solar energy. The contract as it stands now has GDOE paying roughly 19 cents kwh for the first year of the contract with that number rising 1.5-percent every year thereafter for the next six years. GDOE Superintendent Jon Fernandez says that information gathered from the four schools will help GDOE when they decide to use renewable energy for other schools.

“I hope that what we learn from this experience will improve our ability to put renewable energy at our schools in the future and maybe inform the work that were doing with GSA, GSA has all the other non-lease schools that they will be developing a solar proposal around,” said Trump.

Fernandez says that the contract will now go to the attorney generals office and they to the governor for approval. Once it is approved, Fernandez says GDOE can move quickly on installing panels at the four schools.