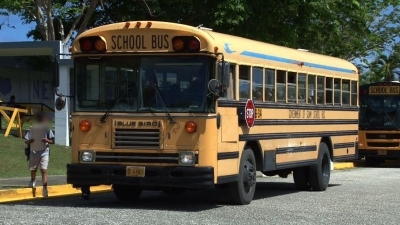 To help prepare for the upcoming school year be sure to check out the new bell schedules as well as the bus schedules posted on our website.

Guam – School is set to start tomorrow and many critical issues remain for GDOE including the conditions of schools, a brand new sexual misconduct policy and the start of a school year without School resource officers.

There is a host of issues facing GDOE as we prepare to enter the 2016-2017 school year. For example, this school year will start without school resource officers.

“Well we have prioritized this, we’ve made that one of our priorities, the RFP has already been sent out its already been through the required ten days and we already have submission for the project. Now I believe it’s in the evaluation stage, I don’t believe they’ve made a decision yet,” said Sanchez.

Last year GDOE faced challenges with cell phone captured fight between students, However Sanchez says he is hesitant to put a timeline on the project. He says now, the contract is in the evaluation stage. Once the evaluations are submitted, Sanchez and his team will look into awarding the contract.

Meanwhile, the new sexual misconduct policy, which was was supposed to be ready by the start of the new school year, will remain in draft form come the next school year.

“So it won’t be ready before school starts and the main reason is because the board really wants to take their time and make sure it is done right. We have gotten a lot of input from administrators, input from the board members. Now we want to make sure we speak to the union to get their input,” said Sanchez.

Last week, the Guam Education Board decided to extend superintendent Jon Fernandez’s leave while an investigation continues into allegations of sexual misconduct and extortion. Last week the Guam education Board blasted GDOE officials on the conditions of schools such as Benavente Middle school which is experiencing leaking in the cafeteria. Sanchez says right now GDOE does not have the funds to garner a complete and long term fix to the problem.

“We have our facilities and maintenance up there working on the current leaking and seeping that’s coming into the cafeteria. But We are trying to look for longer term solutions into that right now, we are trying to work within the amount of money and resources we have right now, but right now it is being addressed,” said Sanchez.

To help you be prepared for the upcoming school year be sure to visit our website at pacificnewscenter.com For a full list of the new bell schedules as well as the bus schedules.