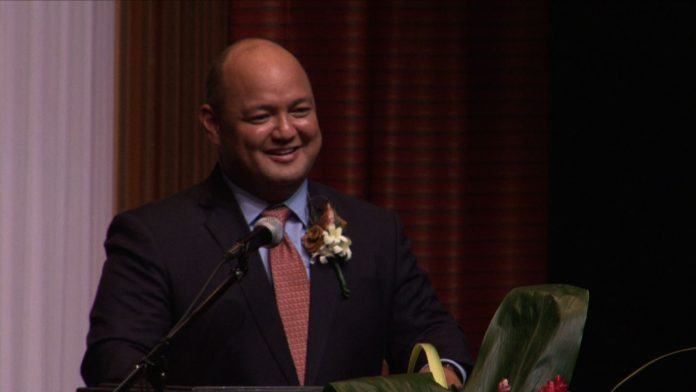 Since Jon Fernandez took over as the Guam Department of Education Superintendent in 2012, he says there have been a lot of changes and improvements to the department. His focus now is continuing the improvements.
Guam –  Jon Fernandez gave PNC a preview of his third and possibly last State of Public Education Address that he delivered tonight. After three and a half years as the Guam Department of Education Superintendent, he says this address is special to him.
Fernandez spoke to PNC before his speech saying, “Well tonight’s a very special address for me. Not only is it the third opportunity for me to update the public on how we’re doing on public education and where we’re headed but also we’re coming to the end of my four year contract which ends in June, but it’s possibly my last address so I really wanted to take this opportunity to kind of look back over the last three and a half years and talk about what we’ve been able to accomplish.”
He says when he first came on board as GDOE Superintendent, he wanted to stabilize the department. After almost four years, Fernandez says he believes the department is now “stable, united and moving forward.”
Fernandez says there were a lot of changes to the department over the past three years. One of the most important, he says, is putting forth a strategic road map to improve education for students and setting higher standards of learning. With the change also comes a new way of testing, from the old Standard Achievement Test 10 to the new ACT Aspire assessment. Last school year was the first time students took the ACT Aspire assessment and Fernandez says the test results will be one of the topics he will bring up in his address.
He explained to PNC before his speech saying, “I’m going to talk a little bit about where we are with the results of our new assessment. We knew we did better in English but in Reading and Math we have a long way to go. It’s the first year and we’re going to use those results to help our students succeed.”
Fernandez says another change he will talk about is the facility improvements at various schools. He told PNC, “A lot of improvements have happened since 2012 with our ARRA funds with the expansion of Okkodo, the renovation of Untalan and the opening of Tiyan High School. There’s more underway. We’re closer than ever before to support the renovation of Simon Sanchez High School and other schools. It’s important we sustain on that path and get the support we need from our stakeholders.”
Lastly, US DOE wrapped up their visit last week to oversee GDOE’s progress in transitioning out of high-risk grantee status. Fernandez says he will update stakeholders about US DOE’s visit and what improvements GDOE has made in financial management. He says, “We know that until we get a handle on our resources and operation, it’s going to be hard to improve the programs for our kids. I think we’re making progress. We have a lot to do and a long road ahead.”