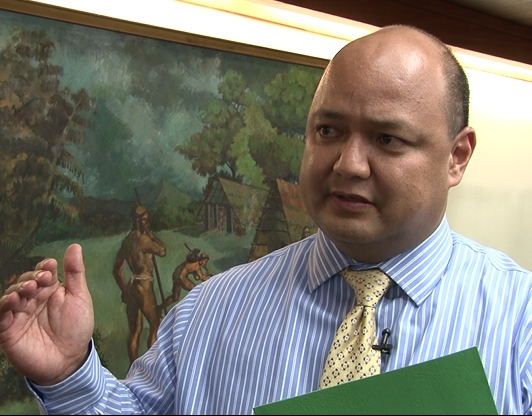 Guam – “There are three things I want to talk about today. One is teaching and learning. Two is college and career readiness. Three is state of facilities.” says Guam Department of Education Superintendent Jon Fernandez.
He says in the next couple of years, those are the items he will be focusing on. First, he talked about the much needed renovations to the schools, especially Simon Sanchez High. Fernandez explains that they’re still in the process of negotiating with the Guam Education Facilities Foundation about the $100-million dollar capital improvement plan for the schools.
Fernandez says, “When we’re done with this work, it’ll mean an improvement to one of our Northern high schools. That’ll make four of those six high schools lease back deals. The schools will be maintained and operated by a landlord and all we have to do from the school system side is go in there, educate our schools and no more of those heavy maintenance and heavy operational issues that we struggle in all our other schools over time.
Fernandez then brings up his concern about the department’s lack of teachers. Like other districts nationwide, he says, there is a shortage of secondary science and math teachers. He says he wants an effective teacher in every classroom. That’s the goal, however, the reality is…
“Here’s the reality. We have 2000 teaching positions in the school system. Every year, we run short. We run about 200 to 300 short every year. That means 200 to 300 we’re not able to fill with a fully certified teacher,” says Fernandez.
Lastly, Fernandez says he wants to prepare students for college or for their career. He explains that when he talks to high school students, a majority of them say they do want to go to the college, but then, he says, students don’t get the support they need. Fernandez says since GDOE has a 76% graduation rate, he wants to make students more aware and involved with scholarship opportunities, financial aid, internships and apprenticeships. Ultimately, he pointed out, that students need…
He says, “So it’s support at home, raising those expectations that college is important and helping them get to the next level, having the resources, and believing in themselves that they’re ready for college level material.”