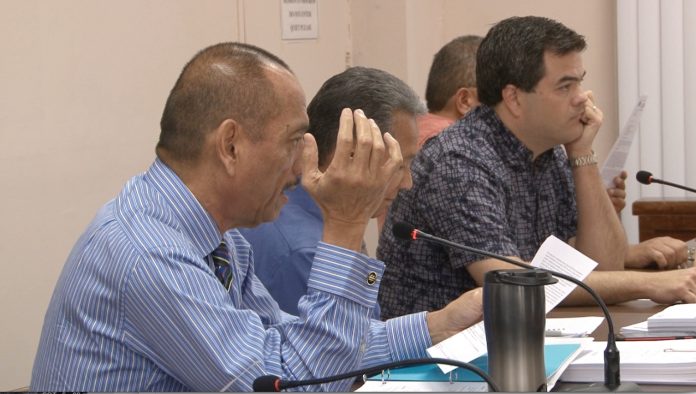 The budget hearing for the Department of Education is scheduled for Thursday.

Guam – With a cumulative fy2015 budget deficit of 120 million dollars looming overhead, the Department of Labor and Bureau of Statistics and Plans asked for an increase in their FY 2017 Budgets.

Another round of budget hearings rolled on today and all three participating agencies asked for increases in their FY 2017 budget. The biggest increase request came from the Department of Labor with a near 400-thousand dollar increase in FY 2017. Additionally, Acting Department of Labor Director Sam Mabini requested to move five employees at DOL, whose salaries were funded with federal money to Guam’s already strained general fund.

“This the absolute wrong time to be moving people out of perfectly good federal positions into general fund positions, increasing your budget by 400k, coming before us and saying its one time…this is not the time be taking them off the federal…keep them on the federal,” said Budget Oversight Chari Vice Speaker B.J. Cruz.

GDOL says The US Department of Labor is shifting the way they award grants to a competitive structure instead of automatically awarding the grant. Mabini says this change in direction means the Island will most likely see less federal money. Mabini says GDOL is taking a proactive approach by moving these positions into the general Fund. Cruz maintains that with a cumulative deficit of 120 million dollars in FY 2015, Guam’s economy is drowning in debt.

“Build sustainability maybe next year when we are not drowning. This is not the year to be moving people around, I thought you lost the program,” said Cruz.

GDOL’s budget for FY 2016 was 1,665,767. Asking for an increase of 384,829 would bring the requested budget for FY 2017 over the $2-million mark. Again, GDOL cites several reasons for the increase, including the agencies absorption of the Agency for Human Resources development.

Additionally, The bureau of statistics and Plans requested a 23, 166 dollar increase from last years budget of 1,251,880. This requested increase would bring BSP’s FY 2017 budget to 1,228,714. BSP cites an increase in funding for office space rental as well as an increase in the telephone budget after a federal audit removed federal funding for BSP’s telephone expenses. The budget hearing for the Department of Education is scheduled for tomorrow morning.