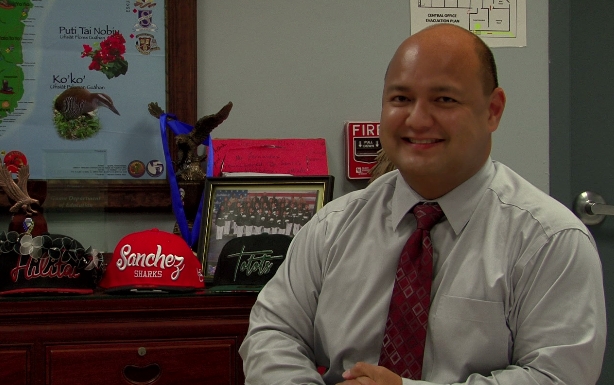 Governor Calvo sent a personal note to the GEB Chairman Peter Alexis Ada and Vice Chair Lou San Nicolas. The Governor believes that the partnership between his administration and Fernandez has helped make positive changes at Guam DOE, from the Common Core curriculum to a universal Head Start program. In his note to the Board leadership, the Governor wrote: “Jon is doing a great job. Please relay to the board. I humbly ask members to extend his contract. Thank you for your leadership. Merry Christmas! Eddie.”

Guam – To renew or not to renew? That’s the question surrounding Jon Fernandez’s contract as the Guam Department of Education Superintendent. After the Attorney General’s Office answered legal questions board members asked at the last meeting, that is the question they have to answer tonight. Whether they want Fernandez to continue as Superintendent for another four years, or start the search for another.

Fernandez says, “There’s a lot on the agenda, but one of the items that’s going to come up is the board and their intention on how they want to handle my request to discuss renewal or extension of my contract beyond June 30 2016. When they vote tonight, there will be a motion to either agree to extend or not. Once I get that information, we can either proceed to extend a contract, or if not, we can move forward to open up the Superintendent search and ensure there is smooth transition if that’s the desire of the board.”

Fernandez says he just wants to make sure there is enough time to train the new Superintendent so that there will be a smooth transition and also so it doesn’t disrupt the school year. He explains, “There’s been a lot of turnover at the leadership level. We look over the history of the department. We’re talking about 14 months for a Superintendent which isn’t a lot of time to make the kind of changes needed to put the department in a good direction. That turnover impacted the department over the years, it has fractured the department. Many different parts, schools, that are not in sync for our children.”
His main concern is keeping the momentum of the department going. Fernandez says, “I don’t want that to happen to the department again. We’ve come too far in the three and a half years. We’ve had a lot of accomplishments and we got a foundation for further improvement and that’s the adoption of high quality college and career readiness standards, we focused on investing on teachers, and we are continuing to build on that and plans for the future.”
GEB will be meeting tonight but today Fernandez wanted to find out what the students think of his request to renew his contract.
“For me, I ran a poll on Twitter just to see what the students thought and we got over 1000 people voted, the results at 93% to extend and 7% to find someone new. My reaction is I appreciate the support but I look at the 7% saying what can we do better, what are the issues they care about, what are we not doing,” Fernandez says.
GEB Chairman Peter Alexis Ada says they only need a 5-vote majority. If the board votes to keep Fernandez as Superintendent, they have until March 1st to negotiate and finalize the contract.