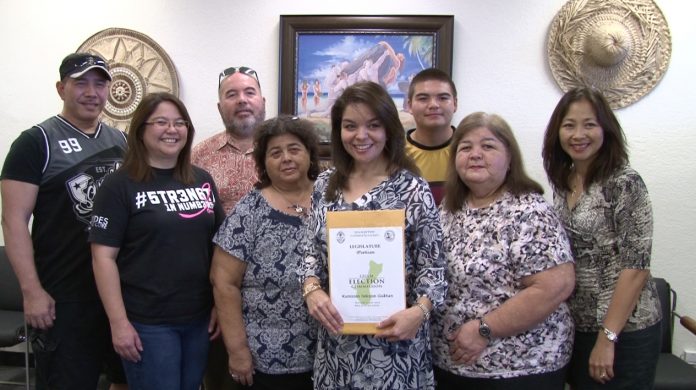 At 4 p.m. Wednesday, Louise Muna picked up her packet to run for senator, bringing the total number of candidates who picked up packets to 106.

Guam – This year’s primary election has an unusually large pool of potential candidates. The Guam Election commission is beefing up their resources but they will also be asking for more money to do so.

Wondering who to vote for? At 4 p.m. Wednesday, Louise Muna picked up her packet to run for senator, bringing the total number of candidates who picked up packets to 106. This is a large pool for this time. GEC Executive Director Maria Pangelinan says that on the first day that packets were made available she had 4 times as many candidates pick up packets than in the 2012 and 2014 elections.

This is the first election since salaries for elected officials were raised.

Just last night, the GEC board approved a supplemental budget request for $309,000 to beef up polling site.

Pangelinan says GEC needs 45 additional precinct officials. She says GEC also bought new polling booths and new hardware for its voter registration system. Another cost is the anticipation of higher homebound voter turnouts. Homebound voters are individuals, who cannot leave their homes and require GEC officials to physically drive to the residence, register and take the residents vote on site.

As for voter initiatives, which are sometimes filed by potential candidates on various issues, for example to repeal pay raises etc….Pangelinan says GEC has not received any formal requests..

“No one has filed formally for an initiative, we’ve had inquiries in the past and in the very recent past we did get an inquiry on the initiative but we haven’t received any formal inquiries,” said Pangelinan.

Pangelinan says that GEC will begin accepting packets on April 19, and the last day for GEC to accept packets is June 29.