Delving into that small business rent relief program specifically, Gov. Lou Leon Guerrero today announced the program is moving forward, although with not as much money as GEDA had originally requested.

Melanie Mendiola, the administrator of GEDA, had forecasted the program would need around $5 million to help 500 businesses with 2 months of rent or $20,000, whichever was lesser.

However, Adelup is only handing over $3 million to the program so Mendiola says they’re lowering the threshold to $15,000 or two months rent, whichever is lesser, and likely only be able to help 300-400 businesses.

The rental assistance grant is meant specifically to help with rent, either paying the landlord directly or reimbursing the businesses.

She says it’s a short application time frame and they’re trying to keep it “paperwork lite.”

“We’re asking for a lease agreement, an up-to-date business license and, we’re also asking for a statement. We provide a form so that the landlord can provide a breakdown of what the rental situation is. But it’s not just for individuals/businesses who are behind on their rent because there may be a business that is staying current with their rent but they’re using their personal savings to do so, or they’re not paying their vendors,” Mendiola said.

The application will open up tomorrow morning, Wednesday, for just over 2 weeks, closing on December 11th.

Mendiola says her team is prepared for the incoming flood of applications since interest has been high in the program.

She says working weekends is in the plans to ensure the money is pushed out by the CARES Act federal deadline of December 30th. 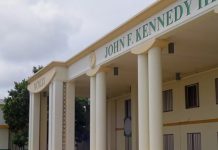