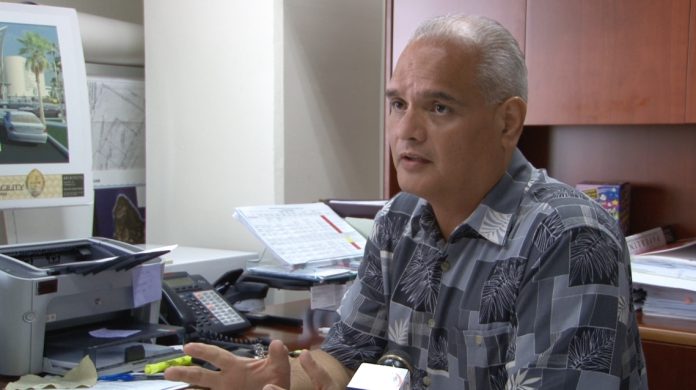 Real property Manager for GEDA says the board is expected to choose a proposal within the next year.

Guam – After killing the gravity bay outlet plan for good, GEDA will now focus on the five other proposed plans to mitigate flooding in Tumon.

GEDA’s real property manager Larry Toves says that GEDA will now look, in depth, into the other five proposals to help mitigate flooding in Tumon. Toves also says that GEDA is looking at options outside of the five proposals. Right now GEDA is in phase ii of their efforts to mitigate flooding in Tumon. This involves adding additional storm water inlets along San Vitores road and additional drains along marine corps drive. Toves says, with the gravity bay outlet gone, the other five options are three times more expensive. GEDA must now work with the legislature to find additional funding. In terms of Senator Dennis Rodriguez’s bill 220, a bill that asks to prohibit the gravity bay outlet, He says the GEDA board and the Senators office have been working together and that Rodriguez will be “taking the lead” on finding another solution. Phase two is expected to take about a year, but Toves says they should have a solution within that timeframe.

“The costs of all those five alternatives are three times more than what the gravity bay outfall is, so we’ll have to look at a funding source and that’s part of the process here at GEDA. We’ll have to identify or at least come up with a recommendation to the legislature and work with them on where that funding is gong to come from…it takes about a year to complete phase 2. We will have a decision made before the end of that year as far as which of the alternatives we will use in phase three,” said Toves.