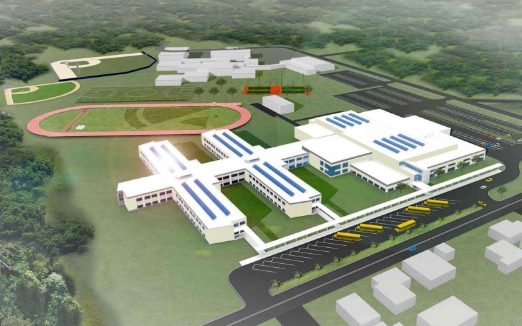 Even though the procurement process for a new Simon Sanchez High School is at a standstill, the Guam Educational Facilities Foundation presented their design and plans for the new Yigo campus.

Guam – The Guam Educational Facilities Foundation shows us the conceptual design for the new Simon Sanchez High School. This follows GEFF’s meeting with the Yigo community where they explained what their proposed site plans are for the new Yigo campus and discussed its impacts.

GEFF Vice President Development & Construction Sean Easter says, “The good news is that the school is staying within the existing property so no neighborhood will get disturbed, we’re not taking down boonies to create a new school site and the current infrastructure, the power, water, and sewer, are all sufficient to handle the new school. For the power standpoint, it’ll be more efficient than the existing school. Our hope is to build a larger school but more efficient than the existing school has.”

According to the design, the proposed new Yigo campus is clearly larger than the existing facility. According to Easter, the new Simon Sanchez High is about 245-thousand square feet. “You have your gym, auditorium, administrative services at the north end of the building, several wings of two-story classrooms highlighted situated in the campus, all interconnected, great security, separate bus entrance and exit where parents and kids are dropped off. They have extra sports facilities, they have football, baseball, softball, track, tennis, soccer practice field, a facility at the football field with bathrooms and concessions and a press box and storage area,” he says.

Easter explains how they plan to proceed with building the new Sanchez, “First we’ll build the school, get part of the sports facilities done before we have to demolish the existing. So the football, baseball, softball field fits prior to demolition so the idea is build the entire school, move the faculty and students into the new school and eventually demolish.”

Easter says even though they received a positive response from the Yigo community, they’re still waiting for the procurement process to come to an end. “Students, principals, parents, they want their school built quickly so I think it was a very positive response. With the procurement staying through the appeal process, we’re at a point of sit and wait. We are working on the USDA application but even that, it will be held until the procurement is completed,” he explains.

Easter says they hope that the Office of Public Accountability will give their opinion on Core Tech’s appeal in the next 30 to 60 days after the motion hearing set for next week. Then, GEFF can continue finalizing the design, securing the financing, and obtaining permits needed which would take about 5 to 6 months. However, Core Tech can still request for a judicial review. Easter says when all that is done and construction begins, it would only take about 18 to 20 months to build the new campus.