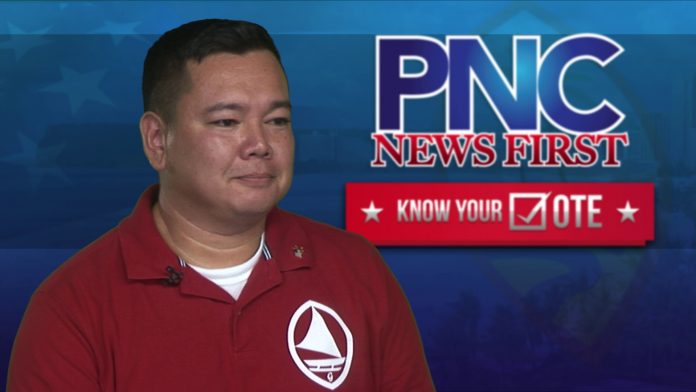 Roy Gamboa grew up in the village of Agat and graduated from Oceanview High School.

Guam – For tonight’s edition of Know Your Vote where we feature mayoral candidates of each village, we sit down with Agat candidate for mayor Roy Gamboa.

Roy Gamboa is a son of Agat who graduated from Oceanview High School. After spending some time in the military and in the private sector, he’s now running for mayor in his hometown village.

“There are many reasons why a person decides to step up and run for political office. I believe that after spending some time and listening to the elders of the village and parents alike and everything like that, I’ve been able to put a plan together that I believe is gonna help Agat progress. There are many things that I would love to see in the village,” he says.

He tells us about his experience in the military as well as his educational background that he believes has prepared him for this role. As a war veteran, Gamboa says he’s been on the ground working directly with people.

“I spent time with the United States Army Reserves, the Guam Army National Guard as a combat medic and most recently with the United States Marine Corps. Some of the experiences, especially visiting areas like Fallujah and Ramadi helped me to take a look at what it would be like for an impoverished nation and what not and what we were able to do there was help, help the community grow, re-establish the government, give back, give back to the people of Iraq what was no longer there. Those were tough troubling times but a lot of those experiences that I brought back from Iraq helped pushed me, helped guide me so that I can make all the right decisions for the people,” he explains.

He also talks about his education.

“I graduated from Ocean View High School when it was still a high school and recently I graduated from the University of Maryland University College. My focus of study there was in management studies. Key areas were in emergency management public safety administration, among other things,” says Gamboa.

“The combination of military and education, says Gamboa, is what will guide him should he be elected mayor of Agat. Just some of the issues important to Gamboa are improving infrastructure, addressing erosion and the overall safety of the village. Gamboa says he already has some plans in place to address these issues.

“What I’d like to do is work with the Legislature and governor’s office to establish an economic development area for the village of Agat. Now specifically for the fields or the businesses related in medical, urgent care, home health care services, we want to see these things  develop in the village. We have a lot of manam’ko, a lot of elderly people that must drive to central or northern parts of Guam just to get medical care. What we wanna do is we want to create an environment so that it makes a lot of business sense for the medical industry just to set up shop in Agat,” he says.

Gamboa would also like to expedite the Land for the Landless program.

“There’s already parcels of land earmarked for The Land for the Landless. We wanna expedite that. We wanna speed that up. The southern sports complex is already in development, what we wanna do is ride on the back of that program and startt leveling property so that way we can start giving the people the land that is there for them. There’s no better foundation to a future than owning a piece of property,” he notes.

Gamboa says he’d also like to establish the mayor’s office as a non profit organization so that the village would qualify for grant funding. These funds will help pay for infrastructure improvements to the village as well as other projects.

So why should the people of Agat vote for Roy Gamboa?

“It’s an honor to sit here in front of you, thank you and ask the people to give me this opportunity. So I ask the people of Agat, please just get out there on August 27. All I ask is for one of your votes. Put your trust in me. We have a plan, we’ve developed that plan by listening to you, the members of our community. We’re gonna develop that plan, work that plan and execute this plan so that everybody can benefit from this plan,” says Gamboa. “I feel that with my experience and my proven track record of accomplishments, that I’m more than ready to be next mayor of Agat.”