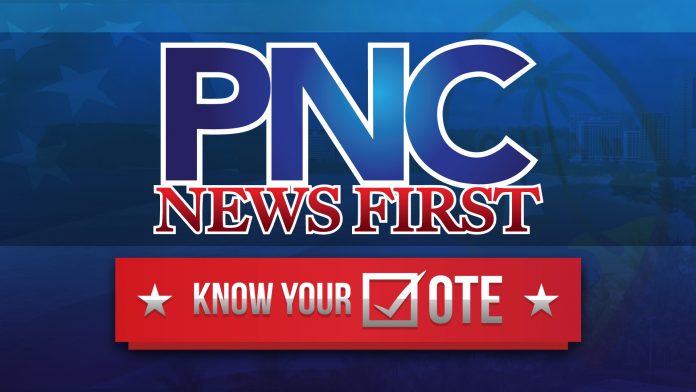 Both candidates are running on the Republican ticket

Guam – PNC wants to help you learn more about the candidates running for mayor. Tonight we feature two candidates from the village of Dededo in this segment of Know Your Vote.

Former Dededo Mayor Scott Duenas says he wants to run for mayor again. So why is he running again? “Even though without any major typhoons it’s looking a little bit grimmer than when I left. Vegetations are kind of encroaching onto the roadways. Strays you know dogs cats and even chickens chickens are now getting really bad in my area,” said Duenas.

Duenas believes that he can provide more opportunities for both village youth and seniors to be more active. He wants to fix up the dilapidated parks and make safer walking and jogging paths. “One of my goals is to establish a gym in the main area of Dededo right now we got one in Astumbo and it’s pretty much utilized but I think the majority of the population is in the main Dededo and Macheche area. So we need a gym also in that vicinity.”

As for his education and experience, well he served as Mayor of Dededo from 2001 to 2005. He graduated from the Navy apprentice program as a journeyman telephone repairman, he served in the Navy for 24 years, he worked for both GPA and GIAA as a safety supervisor and administrator and he worked in the U.S. Postal Service.

So why vote for Duenas? “With my background in the military, background dealing with people in the postal service and my term as Mayor with two super typhoons under my belt, I was able to recover from those typhoons and not hinder the ability of the community to continue their sporting activities sporting programs,” said Duenas.

Ernie Aquino is another candidate for Dededo Mayor. He’s never worked in the government before but has decided to run for office because he says he hasnt seen any improvement in the village for the last 14 years. As far as education and experience goes Aquino graduated from GCC in 1985.

“Most of my education has come through the military when I served probably in the Navy,” said Aquino adding, “working for the private sector being in positions where managing large groups of businesses being an entrepreneur”

Aquino says that he wants to improve programs for senior citizens and village youth. He says he wants more sports and recreational programs but he also wants a program where village youth take care of village elders rather than wasting their time playing video games. “I think there’s a little more you need to learn from the older generation that can be useful than Pokemon Go,” said Aquino.

One of his goals is to improve the parks in Dededo. “The most important issue right now I think that is plaguing our villages is the trash. The dumping of our trash. Illegal dumping and the cleanliness of the village itself,” said Aquino.

So why vote for him? “I’m not a politician I’m a hard nosed downright pull up your sleeves kind of guy that’s gonna do the work. Period,” said Aquino.

Our know your vote segment will feature candidates for village mayor, the Guam Education board and the CCU. It will air every Wednesday and Friday during PNC’s News First.