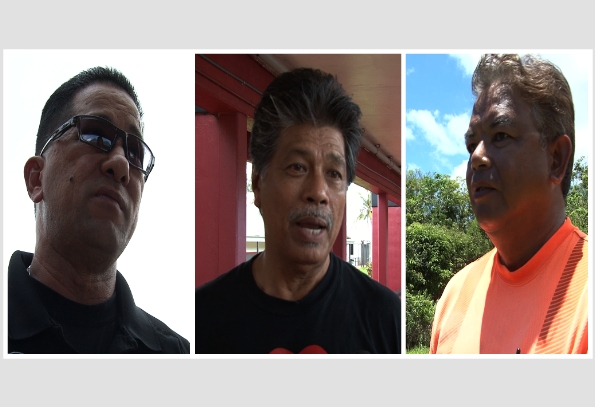 They are Joseph Flores, Peter Pascual and Incumbent Rudy Matanane.

Guam – We head up North to the beautiful village of Yigo where three men are seeking the title of Mayor. Let’s get to know them.

Yigo Mayoral Candidate Joseph Flores says, “I’m retired from the Government of Guam. I was in the Fire Department for 36 years government service. I graduated from the GCC academy. I graduated ATF academy and military police academy.”
Yigo Mayoral Candidate Peter Pascual says, “I’ve served 27 years in the military. Just retired in 2013. That’s part of my background that I can bring to the plate as far as serving the people of Yigo.”
…and running for re-election:

The first candidate Joseph Flores says he wants to create neighborhood watches to curve illegal dumping and make Yigo a safer village, create a veterans organization, and focus on improving the schools and roads. Flores explains, “I want to take care of the roads. There are a lot of problems regarding the senior citizens getting picked up. According to their policy, they don’t get picked up if their roads aren’t paved. Another thing is the bus stop.”
The next candidate is Peter Pascual, who has been very involved in the community by participating in many organizations such as the Ilocano Association of Guam and Takano Neighborhood Association. Pascual wants to improve programs for the Senior Citizens and the youth. He says he also wants to fix infrastructure around the village. He says, “One of the issues was vegetation overgrowth in one area. A lot of the residents were requesting assistance to have that trimmed down. One of the things I really want to bring back is community involvement and with that, we can get a lot accomplished,”
Last but not least, Incumbent Rudy Matanane says he wants to address the lack of facilities in his village. Matanane explains that he wants Yigo to be family friendly by having a summer camp for the children, a recreation center, a night market, and a stadium for events. He says, “One of my plans is trying to get government properties to improve the kids sports facilities like the soccer field, baseball field, you know Yigo is a really big village. We have about four basketball courts now but we still need more.”
So we ask them…why should we vote for you?

Flores says, “I’m a proven leader and I really want to fight for the village of Yigo for everything that needs to be done, for the roads and schools and so forth.”

Pascual replies, “I’m stepping up to the plate and I’m willing to meet up with all these challenges for the village of Yigo, but it’s up to the community.”

Matanane says, “The biggest reason I ran for mayor and why I’m running for mayor is because I love my job and I have a passion for helping people.”