Guam – Players engaged in giggle-fests from missed shots, elatedly celebrated some first-ever goals, and many may have experienced Monday-morning body aches – all in fun – from the action at Guam Football Association’s inaugural Soccer Moms League, made possible through a women’s football grant from FIFA.

The sunny afternoon began with a parade of teams and a short opening speech by GFA President Richard Lai before over 100 women made their way to the pitch for the league’s first matches. About 100 more players joined their families and other spectators to wait for their scheduled 4:10 p.m. matches. For most, the afternoon signaled the first time they would ever play in an organized soccer match, after years of making GFA their home on the weekends to cheer on their children or husbands from the sidelines.

[The teams participating in the Guam Football Association Soccer Moms League pose for a group photo during an opening ceremony before the start of the league matches at the GFA National Training Center.]

“It’s payback – this time my kids and my husband get to yell at me during the match,” said first-time soccer player Matilda Ward, whose children Leilani and Taka play for Quality Distributors in the Docomo Pacific Robbie Webber Youth Soccer League and husband Kieron plays for the Rovers Masters.

Ward, the goalkeeper for team Victorious Secrets, surprised herself by managing to stop shots and at times, making good on some gutsy plays running out of her box and leaving the goal unattended in her team’s close match against the Blue Ballers.

“For my first time playing, I thought the women were fairly good – some had some mean kicks, I surely felt them in the goal,” said Ward after the match. 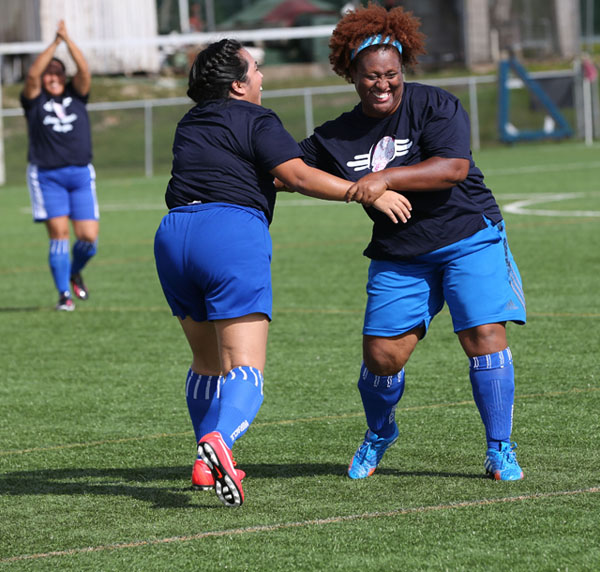 [The Wolverines Båsta Move Blue’s Tequilla Harris celebrates with teammates after scoring the first goal in her team’s match against the Power Puff Moms in the inaugural Guam Football Association Soccer Moms League at the GFA National Training Center.]

Both the Soccer Moms League and the Women’s League continue 3 p.m. Sunday.