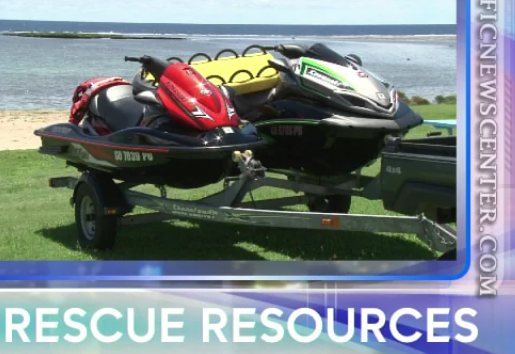 Last month, news of a local business assisting in a water rescue garnered much praise from the community but it also highlighted a critical need for more resources in the south.

Local businessman Jeff Pleadwell stepped up to the plate in helping to save lives after he saw a need and the government’s lack of resources.

“We’re alert we are ready to go and we’ve been asked many times by GFD to go check on situations or when they have somebody in Talofofo bay. Even they call us and ask us to go help. I don’t mind, I don’t want to be relied on and that’s what happens now. Sometimes they don’t even come. I just do the rescue myself,” Pleadwell said.

“There used to be one at Ylig and when they built that Accion hotel, they took it out for some reason, very bad. If ever they have sort of airplane crash out here or a boat in trouble, the rescuers are going to have to come from either Agat or Merizo,” he said.

Pleadwell says time is lost when rescuers have to come from Agat or Merizo as a rip current from that area makes it hard to get through.

GFD Spokesman Kevin Reilly says they currently respond to marine incidents on the eastern side from Pago Bay and the Agat Marina. GFD is pushing to get a boat ramp on the eastern side of Guam as there is no suitable boat launch area and Pago Bay is only accessible with jet skis.

“We have been assisting other agencies such as GEDA, the Department of Agriculture, and the Guam Police Department to try and secure funding to build a boat ramp at the Talofofo Bay,” Reily said.