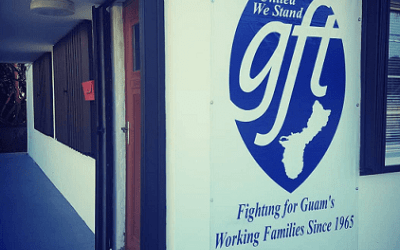 A lawsuit is brewing as disgruntled essential government employees are upset that they will not be receiving double pay for putting their health at risk on the frontlines of the COVID-19 pandemic.

The Guam Federation of Teachers union is calling on essential employees to join them in suing the Government of Guam for not adhering to the personnel rules and regulations for paying employees during an emergency declaration.

GFT representative Robert Koss says there are a lot of disgruntled GovGuam employees at every level.

“We have seen in the past that employees who worked during emergency periods were paid in accordance with the policy. We even see this in this instance at some agencies such as GWA and GPA where employees are being paid in accordance with that policy. Now, I understand the governor doesn’t want to pay it for one simple reason, she says there’s not enough money,” Koss said.

That’s where the dispute lies. GFT believes that the Governor’s budget proposal for spending the federal dollars should have included covering the double pay for the essential employees on the frontlines.

“These people were denied the opportunity to stay home and be safe. They were ‘volun-told’ to go out and expose themselves to the virus. They work long hours. Nurses are working four 12-hour shifts. So these are long days with almost no sign of appreciation from the administration for what the public employees stepping up to the plate did for her,” Koss said.

But according to Edward Birn, the director of the Department of Administration, the double pay rule does not apply in the circumstances we are currently experiencing.

Birn stated this in response to an inquiry by Sen. Joe San Agustin on the issue.

In that response letter, Birn says that the rule states: “Those employees, required to remain on duty to provide essential services, shall be paid double the regular rate, or granted compensatory leave credits for the hours worked during the period the facility is closed and the other employees are on excused leave.”

San Agustin said: “As you may see from the rules, the facilities at which essential workers were carrying out their duties were not closed, neither were the other employees on excused leave.”

In a release, San Agustin stated: “It seems to me that the administration has found a way to circumvent the rules that were adopted in support of our hard-working men and women who show up to work to fight this pandemic.”

He called the administration’s reasoning “ludicrous” and says essential employees should not be placed in the same category as those deemed non-essential.

“Those the governor has deemed essential, report to work assisting in the fight of this unknown and unseen enemy in COVID-19 while all others are on ‘excused absence’ and should report to work with a two-hour notice. These essential employees are those we should be taking care of, as they take care of us. I look forward to receiving the Attorney General’s opinion on this matter,” San Agustin stated.

Koss says that if the governor is unwilling to double pay essential public employees for their service during these trying times, then the administration can ease the tension by giving them their annual leave to use at their leisure. Koss says this option may require legislative authorization.

Meanwhile, GFT is asking any essential public employee that would like to participate in the developing lawsuit to visit the GFT union office over the next two weeks.

There will be a form to sign to authorize GFT attorneys to represent those who participate.