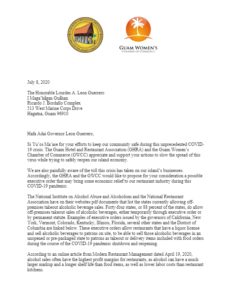 The Guam Hotel and Restaurant Association and the Guam Women’s Chamber of Commerce  are urging Governor Lou Leon Guerrero to issue an executive order to allow the sale of takeout alcoholic beverages in order to “bring some economic relief to our restaurant industry during this COVID-19 pandemic.”

“Our economy is struggling and many restaurants have resorted to takeout or delivery in order to stay afloat,” states a July 8th letter from GHRA and GWCC that was released to the media Monday. “We feel that allowing the temporary sale of pre-packaged or unopened alcoholic beverages along with food items for takeout or delivery would provide some measure of increased income for these restaurants and their staff.”

In anticipation that their advocacy of take-out alcohol sales “may spark criticism regarding the dangers of alcohol consumption” the GHRA-GWCC letter notes that alcoholic beverages served at restaurants normally cost more than the type of alcoholic beverages one can purchase at a convenience store “therefore, the clientele that would order such items would presumably not be doing so to imbibe at a rate that could cause excessive intoxication, especially since the executive order would specifically state that the alcoholic beverages must be ordered in conjunction with food items.”

In their letter the GHRA and GWCC point out that 44 states already “allow off-premises takeout sales of alcoholic beverages, either temporarily through executive order or by permanent statute.”

Among those states where executive orders have been issued allowing for takeout sales of alcohol are California, New York, Vermont, Colorado, Kentucky, Illinois, and Florida.

Those orders include the following:

1) The food establishment must possess a current ABC license

3) Any such alcoholic beverages must be packaged in a container with a secure lid or cap and in a manner designed to prevent consumption without removal of the lid or cap – e.g., no lids with sipping holes or openings for straws

5) Any licensee selling such beverages for off-sale consumption shall prominently post an open container warning in a manner that puts consumers on notice of limitations regarding open container laws, which will still absolutely be in effect.