Guam –  The Guam International Airport Authority [GIAA] has issued a statement in response to the lawsuit filed Thursday by DFS declaring that the airport’s award of the specialty retail concession to Lotte was “lawful and fair.”

Airport Executive Manager Chuck Ada Friday declined on camera comment. But in a release he says Lotte’s proposal was “superior”, and the DFS offer “was not even ranked second.”

He says the appeal and lawsuit filed by DFS “taint public perceptions based on false assumptions and innuendos”  and  “It is extremely disheartening that the integrity of hard working employees of this Authority is questioned in this manner.”

Ada also points out that “DFS has had the exclusive concession at the airport for over 30 years” yet he says “the current DFS concession area is understaffed, outdated, run-down and in desperate need of major renovation.”

In the letter, Hebert writes “the Airport does not concede … that DFS is entitled to holdover after July 14, because its concession agreement is wholly separate from the RFP process and the Airport has a contractual right to require DFS to vacate the premises.”

“GIAA expects DFS to cooperate fully in the smooth and timely transition” to Lotte, and Hebert makes it clear if DFS does not cooperate, GIAA will take legal action to force DFS out by the July 14th deadline.

Hebert writes “the Airport will hold DFS responsible for all of damages caused by DFS’s unreasonable and bad faith conduct” and he threatens Rule 11 sanctions against DFS if the company “continues pursuing its frivolous Appeal.”

GIAA was unable to provide a text copy of their statement sending instead the below photographic image of it. 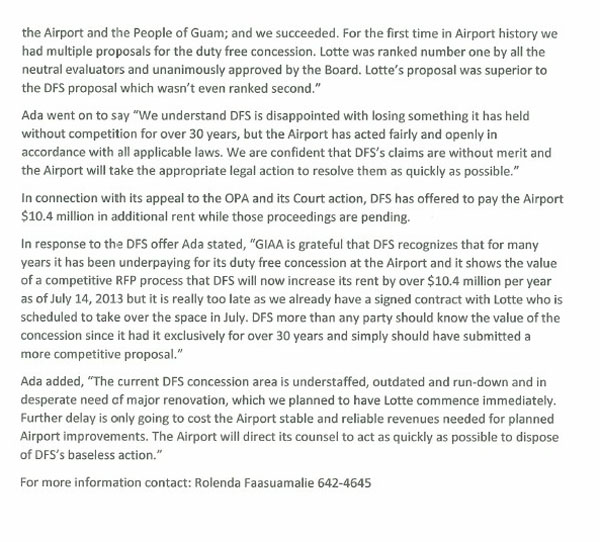