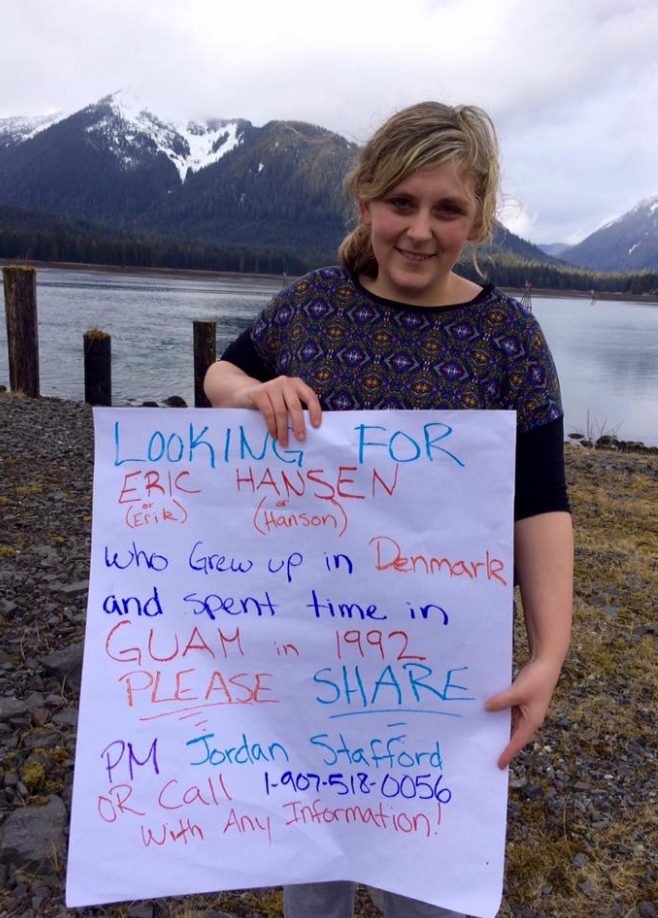 Jordan has been searching for a Danish man named Erik Hanson, whom she believes is her long-lost father.

Guam – Jordan Stafford is on a mission, a mission of self-discovery.

In a now viral Facebook post, Stafford wrote, “I am trying to travel across seas and back in time to find my Dad! Little is known about who he is but there are a few hints we do have that maybe, just maybe, I can find him.”

It was on April 2nd when Jordan decided she would take her search to Facebook.

“Hi, everyone my name is Jordan Stafford, I live in Petersburg Alaska, and I am looking for my biological father, my search all over the world has led me to Guam,” Jordan shared in a video to PNC.

Jordan has been searching for a Danish man named Erik Hanson, whom she believes is her long-lost father. She’s never met him before. In fact, she says neither of them knew about each other until a DNA test revealed she might be his child.

“I just wanna let him know that I exist and I’m out there, because he really doesn’t know that I am his kid, and I think it’s only fair that he knows that he has a daughter and that she’s looking for him and would very much like to have a relationship with him if that’s something that he would want,” Stafford shared.

“What I’m doing is I’m searching basically the entire world for my biological dad,” she said.

Stafford says individuals responded to her post sharing words of encouragement or information on Hanson’s whereabouts. Her most recent lead took her all the way to the South Pacific, because Erik Hanson reportedly worked here, on Guam.

“Between 1990 to approximately 1993, (Erik) was living on Guam and he was working at a car dealership there, and he was living in a small house. He wanted (Jordan’s mother) to quit her job and move to Guam with him. I believe he must’ve had a work visa because he was a Danish citizen,” she explained.

Erik and her mother eventually went their separate ways, but Stafford says they remained pen pals for about two years. Any further information on Erik Hanson has been lost with history. That is, until now.

“I’m reaching out to you guys, because I know Guam is a very small and tight-knit place that I’m sure somebody remembers a person from the early 90’s that matches this description. And I hope that that person can be found,” she shares.

Stafford says she doing what she can to dig up any information on the whereabouts of her father.

“I’ve spent all day trying to find Guam public records or records of work visas. I even wrote down every single number for every car dealership that you guys have and I was gonna call them when I got off work,” she shared.

Although it’s been nearly 25 years since her mother has heard from him, Stafford tells PNC she hasn’t given up hope.

Stafford shared she’s been touched by the outpouring of support and is grateful for the international community’s willingness to help.

“I thank you guys so very much for listening to my story and tagging your friends and asking questions and sending your messages and I truly cannot thank you guys enough for the amazing outreach and support that I’ve gotten from everybody,” she shared, adding, “I hope we can all find him together.”