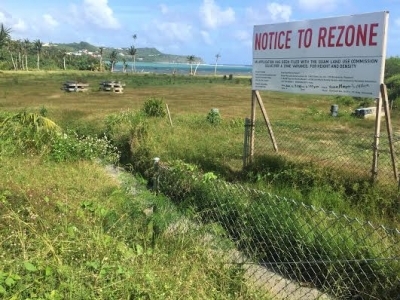 GLUC commissioners refused to vote on whether or not to grant a height and zone variance to Pago Bay developers for two high-rise condos. Commissioners voiced concerns that the developers did not provide them with a written version of their presentation before the meeting.

Guam – The controversial Pago Bay Development has been delayed yet again, this time because the developers failed to provide the Guam Land Use Commission with a complete presentation despite having two weeks to do so.

“It was a breakdown in communication, we thought that we were just going to bring this information with us and present it at this meeting, the next time, were going to work with the case planner and the planning staff of land management,” said Richard Sana, a consultant on the project.

But project manager John Sherman disagreed with the GLUC about the amount of information they are requesting. Sherman said, amidst boos from the crowd, that some of the information the GLUC is asking for can only be provided once the project is underway.

“We’re not asking for the final design, we’re asking for a plan. We’re asking for what is it, what are the issues and how do you plan to resolve those issues,” said GLUC Commissioner Tae Oh.

“If we don’t have written responses or something to make a decision on, I would consider the application to be unresponsive. And certainly we can make a decision based on the application as it stands or we can wait for a response and I just wanted to clarify that because if you just go back to your application you will understand what you need to respond to, I hope that’s clear,” said Limtiaco.

Opposition towards the project continues to grow. You can add the mayor’s council to the list. Mayor KenJoe Ada says he introduced and the mayor’s council unanimously passed a resolution to recognize and support the Yona and Chalan Pago municipal planning councils opposition of the proposed project. Earlier this week, a petition floated around Facebook and other social media outlets against the project. The petition received close to 700 signatures. Senator Frank Aguon also asked the board to suspend discussion on the proposed condos in Pago Bay but GLUC Chairman John Arroyo said that suspending discussion would violate Guam’s rules and regulations, therefore they cannot suspend it.

The GLUC did not give a specific date at this time when the developers will go before the board again.