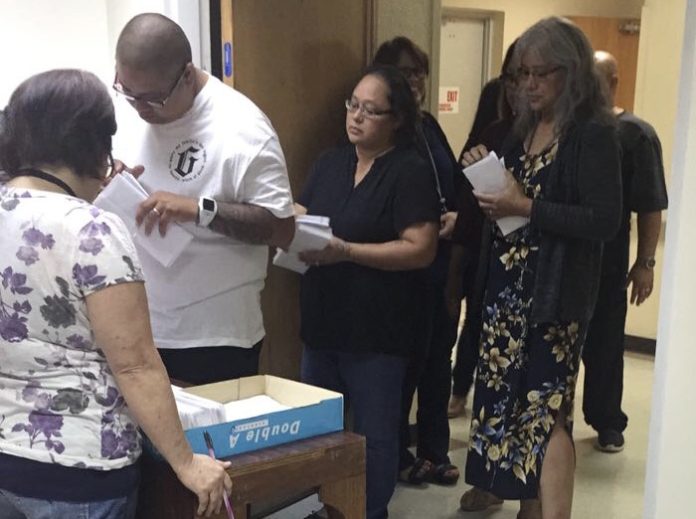 Guam – Guam Memorial Hospital employees were hanging by a thread today but a crisis was averted just minutes before the end of business day. CEO PeterJohn Camacho says they were able to meet net payroll.

However, the payroll crisis was only revealed last night at a board meeting which drew the ire of Board Member Dr. Ricardo Terlaje who lectured the administration for only giving them a day’s notice.

“We have about $600,000 in the account as of this morning and if we don’t get money from [Department of Administration] tomorrow, we won’t meet payroll,” announced CFO Benita Manglona.

The alarming news was revealed for the first time at the first board meeting held since December. Manglona initially reported that GMH needed $3.5 million to meet gross payroll Friday or $2.7 million to meet net payroll. Of that amount, about $500,000 are for physician salaries.

“I wanted to let you know that we don’t really have much options,” added Manglona.

This drew the ire of Board of Trustees member Dr. Ricardo Terlaje.

“My interpretation is that the CFO brought a critical matter to the board one day before the matter becomes critical. What exactly is the solution, your solution, did you think of a solution? You’re presenting something one day before it becomes critical. I don’t understand how the board—are you expecting help from the board?” lamented Dr. Terlaje. “I don’t have a solution to find $2.7 million. I don’t know how they do it in the government to find $2.7 million in a day.”

Manglona explained that the threat of a payless payday is nothing new. In fact, it’s a threat they face every pay period. So if that’s the case, what makes this pay period any different?

“This has always been the case. This has been a problem for the hospital for a long time but because of the situation with the government, and we’ve been making calls just to see what they’re gonna give us tomorrow, and I’m not getting a response,” explained Manglona, referring to the impending fiscal crisis resulting from the Trump Tax Cuts that’s expected to put a $67 million hole in government coffers.

“I’m really a little offended when people come to the board one day ahead and say this is a crisis and we need all this $2.7 million. What are we supposed to do? If it’s every time and it’s the budget, we should’ve been fighting for the budget when it got cut way back then,” Dr. Terlaje said in dismay.

“We had been fighting for it,” Manglona countered.

Ideas were floated during the board meeting, like ending an MOU with the Department of Corrections to provide clinical services, which is costing GMH hundreds of thousands a month due to nonpayment. Others include appealing to insurance agencies and the Centers for Medicare and Medicaid Services for TEFRA rebasing.

None of these ideas, however, would be felt immediately. After lecturing the GMH administration on its ineffective lobbying efforts, Dr. Terlaje then made this suggestion:

“Maybe we need to have a payless payday for someone to listen. And then the people are gonna tell you, ‘I’m gonna quit,’ doctors are gonna quit, we’ll be understaffed, everyone’s gonna have to go to another hospital, we’re closing the hospital because everybody quit,” he said, decidedly. “Maybe that has to happen before somebody wakes up and says, ‘We really should’ve paid them. Maybe we should’ve found that $3.5 million in somebody else’s coffers that they didn’t need it.'”

Sure enough, that nearly became a reality today. This morning, the hospital administration sent out a memo to all its employees which read:

“Due to the challenges we face in collecting monies owed to the Guam Memorial Hospital Authority, release of paychecks may be delayed today. Please know that our fiscal services staff and management will continue working with our payors to make sure we are paid what is due to the GMHA. We request your patience and understanding as member of the hospital management continues to address this challenge as expeditiously as we can.”

Throughout the day, GMH employees waited with bated breath to find out whether they would get paid. Minutes turned into hours with no concrete answer from the GMH administration. By 3 p.m., GMH CEO PeterJohn Camacho told PNC that they were seeing additional funds come through but it was not enough to meet full payroll.

Then at the very last minute, right before 5 p.m., Camacho announced that they were able to meet net payroll.

A GMH source said GMH staff were frightened and some were even in tears as they lined up to collect their paychecks.