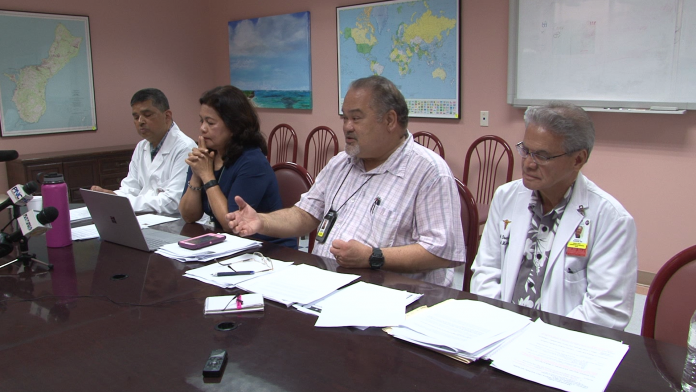 Guam – Responding to the litany of allegations of corruption by a Guam Memorial Hospital physician, officials held a press conference today, frantically disputing Dr. Kozue Shimabukuro’s statements, saying she’s misrepresenting the facts and in some instances is not involved in the nitty gritty of upper management negotiations.

Dr. Kozue Shimabukuro blew open a lid of corruption allegations last night during part two of a series of public hearings for the repeal of the sales tax. She set of a chain reaction that culminated today with GMH administrators scrambling to put together a press conference to address the ousted doctor’s allegations.

The administrators, some doctors, walked in donning their white lab coats.

“The GMHA is disappointed by the allegation presented by Dr. Kozue,” said CEO PeterJohn Camacho. “There were numerous misrepresentations and distorted facts which the hospital would like to refute into detail.”

Camacho and Medical Director Dr. Vince Duenas insisted and continued to maintain that Dr. Shimabukuro was not demoted as she had testified to last night, but that she was being transferred to an area of the hospital where her talents would be more useful. Dr. Shimabukuro is a trained pediatrician with a specialty in pediatric critical care.

“Just to refocus and make sure that it’s clear that there was no change of her title nor her compensation, so thoughts of any demotion are not correct,” maintained Camacho.

Dr. Duenas corroborated some of Shimabukuro’s allegations–that he did in fact meet with her on the dates she specified. But he denied statements that he had demoted her. Dr. Shimabukuro believes that she was stripped of her roles as administrator out of retribution for disagreeing with other management officials.

Outpatient Services Director Dr. Lizama, who was the former medical director who hired Dr. Shimabukuro, clarified that GMH’s intention was initially to bring her on board as a pediatrician. So when management decided to remove her responsibilities as an administrator and phase her into a more clinical role at the Pediatric ICU, Dr. Lizama contends, this is in line with their intentions all along.

PNC: “Why keep the title if you’re not gonna pay her for the title?”

PNC: “But it’s been months since you stripped her of those duties and responsibilities. How long does it take to make a personnel action?

“I mean the title is a title. The title, she has that, but her administrative part is now back to me,” replied Dr. Duenas.

Focusing on the allegations that CFO Benita Manglona deliberately held payroll in limbo on March 9 to intimidate lawmakers into supporting a tax hike that would partially fund GMH, the CFO said Shimabukuro’s claims were simply not true and that checks are always printed the night before.

Dr. Shimabukuro said last night that she contacted the Department of Administration who assured her on March 9 that there were enough funds to meet payroll but that it was up to Manglona and Camacho to decide whether employees would get paid.

Manglona vehemently denied that, saying this happens nearly every pay period. She waits for word from DOA on when the funds are ready to be picked up and deposited into GMH’s coffers.

“They cut checks every day but they don’t necessarily release those checks because they wait until there’s enough money to cover those checks and it’s normal for DOA to not allow us to pick up the check until late in the afternoon like almost closing. I do have a deposit here that day because we send a runner out to pick up the check. This is from the WhatsApp that he posted at 4:43 in the afternoon,” explained Manglona, holding up a piece of paper with a screenshot of the WhatsApp conversation she referred to.

The administrators also countered Shimabukuro’s assertions that the hospital is failing to hold doctors responsible in completing their medical charts, therefore unable to bill patients to the tune of $22 million.

Although not entirely certain about the dates and timeframe in Shimabukuro’s testimony, Manglona says they’ve made great strides in upgrading their system and are more effective in billing now. Manglona says the amount is now in the area of $2 million in unbilled and uncompleted charts.

The administrators also said that contrary to Shimabukuro’s statements that physicians aren’t held responsible for missing deadlines, they do suspend doctors per policy.

“The complete chart needs to be completed by 30 days. So you get a notice, week one, week two and week three and if it’s still not done then there’s suspension.

PNC: “How often to you suspend doctors or not completing their charts?”

“If they don’t complete it they’re suspended.”

“That’s where the independence of the medical staff. When Dr. Shimabukuro talked about administration stepping in the way that’s, really, a medical staff issue,” explained Dr. Lizama.

You can watch the press conference in its entirety on our PNC Facebook page.